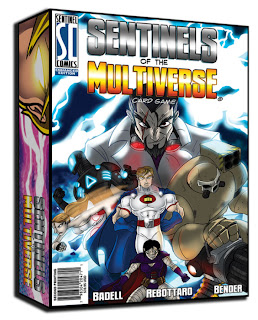 The battle had raged for hours. Unity, The Fanatic, Tempest and Absolute Zero had finally found Citizen Dawn and her super-powered followers in the primal jungles of the forgotten land, and the casualties were steep on both sides. Unity had fallen to a pack of blood-hungry velociraptors and Tempest was badly burned by a volcanic river of lava. But now Dawn was badly weakened, and her minions lay defeated all around her. The Fanatic bravely sacrificed herself to deal Dawn a devastating blow, leaving only Absolute Zero to go toe-to-toe with the charismatic leader and channeler of the sun's might.

Both remaining combatants tapped on their last reservoirs of strength, Dawn blasting away at Zero, and Zero in turn smashing at Dawn with icy blasts.

"Surrender!" yelled Absolute Zero, as Dawn stumbled away, careening out of their jungle battleground and onto an open field.

Citizen Dawn pulled herself to her full height, wiped the blood from her eyes, and screamed, "NEVER!!"

Then a T-Rex ate her.

This is what happened the last time I played Sentinels of the Multiverse. Seriously. A dinosaur ate the villain. It was AWESOME. The time before that, a bunch of slightly bored, overpowered heroes threw a beating on Omnitron, the self-aware robot terrorizing Megalopolis. None of those heroes got much more than scrapes and bruises, though. Omnitron was a wimp compared to Citizen Dawn.

These kinds of stories are why I love playing Sentinels of the Multiverse. Unexpected twists, massive superpowered assaults, energy blasts and alien invasions and defiant last stands. This is what you get when you play this game.

If you've been paying attention for a long time, you probably noticed that I already reviewed Sentinels once. I liked it then, but I also had complaints. Too much paper accounting was my biggest beef, but I also had problems keeping track of stuff like damage immunity and power-up punches. And then there was the problem where 20 decks of cards would slide around in the box and get all shuffled up unless you bagged each one separately, and that was a pain in the ass, too.

Well, apparently the guys at Greater Than Games heard me, because they issued a reprint of Sentinels of the Multiverse that fixed every single problem I had with the game. Now it comes with a pile of cardboard counters that will help you remember when you've got a damage bonus, when you're immune to fire damage, and how many hits are on the pterodactyl. These counters make a good game into a great game, by allowing you to just play without forcing you to keep an accounting ledger handy.

Not only that, but now the box has two rows of card slots and dividers, so you can organize the cards and even put bigger cards between the individual decks, making it easy to pull out just the heroes and villains you want, and leave the rest in the box.

(One tiny, tiny problem I have now, and it's the only complaint about the entire game - the card rows are too narrow. I mean, making the box big enough to hold card sleeves might be optional. Making the box big enough to hold the cards themselves - that's pretty much mandatory. But it hasn't been enough of a problem yet to cause me any serious concern, so I only mention the entire complaint within a set of parentheses.)

My original set of Sentinels of the Multiverse was lost in my house fire, so I can't tell you if the actual cards are different. I don't remember for sure that there was a scaling mechanic in the original, but I also don't seem to see as much of a problem playing with three or five heroes. Lots of cards do damage based on the number of heroes, and there are other factors that take into account how many good guys you can put on the table. The more difficult villains will be even more heinous with five heroes, and a little less dangerous with three. Still, having more heroes is going to be easier than fewer, but since the idea behind this game is the story you tell, I'm mostly going to discount any potential scaling issues.

Basically, Sentinels of the Multiverse has gone from a really damned good game to an exceptionally great one. For my money, it's the best superhero game you can buy. I can almost hear the cheesy lines, see the speech balloons full of villainous pontification, and feel the huge capital-letter hay-makers. I love this damned game, and I haven't even busted open the expansions yet.

Pros:
Great stories and fun art
New additions to the reprint make it easier and faster to play
The best superhero game you can buy

Cons:
(Box is a little tight)

If you want a fantastic superhero cooperative game, you owe it to yourself to visit the Greater Than Games site and buy yourself a copy. You can thank me later.

(Except you may have to wait a little bit, they keep selling out.)

They did change some cards slightly for sacling the game better. I also like that they have a difficulty assesment on the villains, which helps chosing a foe. Great game!