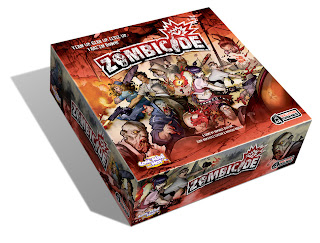 The zombie-game craze has to end sometime, and I hope it ends soon. Too many games about the shambling dead have begun to clog up the gaming pipeline like an undead deuce in a low-flow crapper. But I am really glad that before the whole phenomenon comes crashing down around us, we can run out and get Zombicide, because even in a market flooded by crappy zombie games, there's room to shine.

Zombicide is a cooperative game about fighting the groaning hordes with shotguns, baseball bats and molotov cocktails. It plays like an extended scene from an action movie, with copious violence, horrifying deaths and an impending sense of doom. It's fast and furious and gory as hell, which makes it absolutely perfect for my taste.

I'll be the first to admit that a tactical zombie game with individual heroes, plastic miniatures and a custom map made of interchangeable tiles sounds a hell of a lot like Last Night on Earth. And since Last Night on Earth is so freaking awesome, you might not think there's a reason to own them both.

Except that Zombicide is not Last Night on Earth. Zombicide is faster, and true to the name, involves an absolutely absurd level of human-on-zombie violence. You'll stomp zombies like you were mowing weeds, but they'll just keep coming. In fact, the more you kill zombies, the faster they come - but at the same time, you get better at killing zombies. There's a brutal cycle where your skill determines how quickly the brain-eaters appear, so the more you do, the harder the game gets. The tension ramps up fast, and if you manage to escape with all your arms and legs, you've done pretty well.

There's also speed. You've got a job to do, and you want to do it as quick as you can. The longer you're out there, the meaner the zombies get. Dawdle too long, search too many empty rooms, and before you know it, you'll have overwhelming crowds of the walking dead choking up the streets. Run like you mean it and kill indiscriminately, because if you don't, you'll get cornered in a dead-end alley, spraying bullets while a wave of diseased walkers rushes over you and buries you in dismembered limbs and rotting eyeballs.

A huge part of this ratcheting tension is possible because Zombicide is a full-on cooperative game, which means there's none of this nonsense where everyone works together and one player wins. Either you all win, or you all lose. Sometimes all you need to do to win is get one guy off the board with the supplies you scavenged, which often means the rest of your group sacrifices themselves to a certain death just so that the fast guy can make tracks and escape.

So Zombicide is excellent, but there are a few things I wish were in there. For starters, I would love to see surviving characters improve between games. If my chainsaw-swinging roller-girl learns how to get bloody with a sawed-off, I would love for that girl to still be bad-ass next time I play. It would really improve the story-spinning side of the game if characters got better as you played. It wouldn't be possible, the way the game works, but it would be fun.

And the cooperative aspect of the game has a tendency to make everyone act like logistics experts. 'OK, if you go first, you can shoot twice at those walkers. The runner will move two, so we need to wipe him out. Since you get that free gun action, you move out, shoot, and retreat back to here. I'll use my free search to see if I can pick up another shotgun, and then spend an action to trade. After all that, you can do some complicated math in your head and then alphabetize your sock drawer.'

The analysis part of Zombicide does make it a little less chaotically violent, but it sure doesn't ruin it. It's still plenty of moving fast and fighting hard, and I'm not sure how the game could get rid of the methodical factor and still be as fun. However, I think it could have been a hell of a lot better with some story-related events. If a zombie spawn card had more random events like crashed helicopters, enemy survivors or zombie flash mobs performing Thriller in the middle of Main Street, that would have really given the game a more narrative feel. As it is, it feels like an excerpt from a story, rather than a story itself.

I really do want to emphasize that I thoroughly adore Zombicide. It is wild and tense and crazy fun. I wish it were a little better, but I can enjoy the hell out of it just the way it is. There are tons of zombies in the box, and the heroes are a hoot. The art is spectacular, and the rules (while obviously written by someone for whom English is not a first language) are easy to learn and play. If you were to trim all the fat off a zombie movie, leaving you just the parts where the heroes run fast and kill stuff, you would have Zombicide. And you would like it.

Cons:
Feels a little mechanical
A little light on story

I found a really good price on Zombicide at Sci-Fi City Games. I've bought from them before. I would buy this, if I didn't already have the game.
ZOMBIE MAYHEM
Posted by Matt Drake at 6:40 PM

My friend Jay brought this over a few weekends ago; we played four games, losing them all horribly. And I'd still play again any day. I like the lean design and the brutal pace. This one also gets big ups for box art and figure design; one of the more gorgeous games out there.

Matt,
So, I Kickstarted this title w/ all the goodies to boot. After a dozen games of different configurations; solo, 2 player, 4 player, 6 player - I agree with you on all points. I hate to sound like a rules punk, but the game would rock with just a revised rule book. The developer did release an online "campaign" scenario that adds a bit of progression - but it's still pretty thin. Better than nothing I guess. I'm hoping my bloated investment will really shine when they ship the second wave of goodies. More pop culture heroes, and more importantly IMO - zombie versions of all heroes. The accompanying new rule set should help resolve the player elimination problem. We'll see. I'm optimistic.

I bought this game last week based on your review (the third such purchase with the others being Road Kill Rally and Flash Point Fire Rescue).

What a great game and there is a newly revised rulebook on the website. I wish I had done the Kickstarter and gotten the additional survivors but even without then the game rocks.

They have released an Android and Apple tablet app to help with game book keeping. Very nice.

The one thing I would change is shooting into a zone with survivors and zombies. In the current rules survivors are automatically hit first until eliminated, then zombies. I would assign all misses as hits against survivors unless one has the sniper skill.