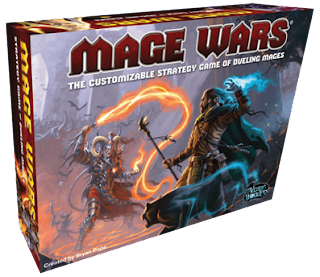 That is not true. I did not interview the creators of Mage Wars. I talked with one of their marketing guys at a convention, but we mostly just talked about beer. I don't know if the randy teenage nerd story is real, but I kind of doubt it. Though if you look at the art in Mage Wars, it totally could be.

Mage Wars might not have the most original title ever, or even a particularly original game idea. Spellcasters dueling in an arena is only slightly less innovative than a game about zombies. But what it does have is the best implementation of the mage-off I've ever played. And considering how many wizard-on-wizard games are out there, that's saying something.

The best way to sum up the game play in Mage Wars is that it's like Magic: The Gathering and Summoner Wars met in a bar, and Summoner Wars got Magic knocked up, but then Magic drank during the entire pregnancy and went into labor early, but the baby was fine anyway and didn't get fetal alcohol syndrome or anything, and went on to go to an Ivy League school and never meet its real father. You have a lot of card play and deckbuilding, and you also have cards as miniatures moving around on a big grid. And those two things are like Magic and Summoner Wars.

However, once you get past the initial similarities, Mage Wars is definitely its own game. For one thing, the longest game of Magic I ever played was still over in 40 minutes, and if you finish Mage Wars that fast, one of you is very bad at the game - or someone is cheating. Mage Wars has a lot more game than the other two combined, and while I definitely enjoy both love-child parents, Mage Wars is deeper than either of its predecessors.

Instead of a deck, Mage Wars give you a spellbook. This is still a whole bunch of cards, but you keep them in a little card folder, and every turn you prepare two spells. You pick those spells, so you never go, 'dammit, I just can't get the cards I need,' unless you're a moron. However, this also means that it slows down a little bit, because if you can't decide what spells to ready that turn, you just sit scratching your chin whiskers for five minutes while the other player silently fumes.

And instead of giving you just a few smart options to do on your turn, Mage Wars practically lets you do whatever you want. You can summon gorgons and demons to do your fighting for you, or you can gear up and send your mage right into the fray. You can throw up magical walls of fire, hurl mind-bending delay tactics, or seed the field with diabolical traps. There are so many options that choosing your actions for any given turn can be an agonizing decision. And then when your opponent turns your heaviest hitter to stone and you strands him in a cloud of poison gas that eats at his rocky innards and you didn't prepare a dispel, you also have the options to curse loudly and flip the table (unless it's my table, because my table is really, really heavy. You would both have to cooperate to flip my table).

Planning and strategy and clever tactics play into every step of the game. Charging too fast might be the wrong move at one point and the best possible play at another. You might decide to stick with ranged attacks and wind up allowing your opponent to bring out too much strength on his own, or you could devote effort to close-up brawls and wind up mired in defensive safeguards. It's not easy to see what the best plan would be until your enemy blasts you with a lightning bolt and turns your healers into meat pies.

I love Mage Wars. I've played several times now, and every time, I find some new trick or cool combo or neat ability. I can't wait for expansions, and I intend to pick up the supplemental card decks so I can build more custom spellbooks. I'll play any time I've got two hours and a willing opponent. But I should definitely offer some warnings, in case you're thinking about buying Mage Wars.

This is not anything like a light game. There are 44 pages of rules, and you'll be referring to them the entire time you're playing. If Mage Wars was any less European, it would come with firearms and hookers. It could take you three hours to finish your first game, and if you're not a quick study, you'll have to play a couple times before you know what you're doing. In other words, this is not a game for pussies. Casual nerds need not apply.

Basically, if you're a serious nerd who likes awesome games, you want Mage Wars.

2 players (more if you're feeling frosty)

Cons:
Heavier than an unwanted fruitcake
Rabid feminists may be offended (I am not, as I actually like naked women)

So you need a monster of a two-player game that you can use to murder an entire afternoon? Here you go:

If that's half of 1/8 as awesome as you make it sound, I really want to play that! Sometime in January?

I'm still chuckling at the thought of two players cooperating to flip a table in anger.

Superb review, I love the tone. I shall be quoting " If Mage Wars was any less European, it would come with firearms and hookers." at every opportunity :-D