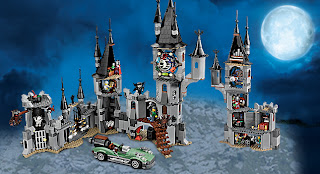 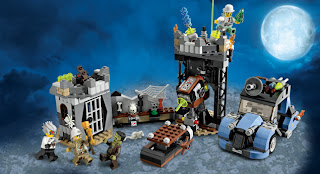 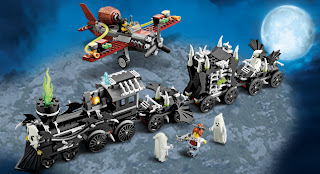 You could cut the anticipation in here with a knife. Everyone wants to know what this new direction of nerd reviews will look like. You're all waiting with baited breath.

(Quick aside -  what the hell does 'baited breath' mean? Do you have really bad halitosis, and your exhalations smell like worms? And did I even spell 'baited' correctly? Should it be 'bated'?  I hope not, because that sounds uncomfortably like it could be the past-tense for a shortened phrase referring to self-pleasuring, and I most certainly hope that is not on your breath.)

And here's the big reveal - my review of Monster Fighter Lego sets will be pretty much like a review of a game, except I won't have to talk about how the rules work. I know, it's a little anticlimactic.

Now that I've wasted this much time discussing the fact that I'll be discussing something, allow me to address the fact that I am both a middle-aged man and a ridiculous child, all wrapped up in one rapidly failing body. I readily acknowledge that it's a little silly to love Legos as much as I do, but I just plain don't care. Legos kick ass.

Other companies can make cheap knock-off imitations, and some of them might even be halfway decent, but you just can't beat the original. If you know Legos, you know what I mean. You know how disappointed you were as a kid when your Aunt Gerty would buy you a birthday present, and you said you wanted Legos, but Aunt Gerty was one cheap-ass old biddy, and she got you those crappy MegaBloks instead. And they wouldn't hold together, and you had to put cheap stickers all over the pieces, and the stickers would peel off and the bricks wouldn't fit together and the arms fell off all the ugly little firemen.

Those knock-offs have come a long way, but every time they try to compete, Lego is a step ahead. Witness the Monster Fighter line. They show once again that Lego is the innovator, and everyone else is just playing catch-up.

Let's start with the theme. Other bricksters fall back on licensed crap like video games and movies based on board games that get turned into toys, but Lego brings its A-game and comes up with its own awesome stuff (except Star Wars, but that immediately gets a pass because, come on, Star Wars). In Monster Fighters, every set comes with a bad guy or five and some intrepid opponents. The villains are classic movie monsters like vampires and werewolves and ghosts, and the heroes are Edwardian steampunk warriors flying ornithopters or driving jalopies mounted with missile launchers. I know that sounds awesome enough to make you run out and start throwing your money around, but it gets better.

The monsters have to be cool, obviously, or why would you bother? So the sets that come with these creatures of the night are just plain ridiculously awesome. For example, the crazy scientist and his monster (think Frankenstein, and the monster we all thought was Frankenstein when we were kids until we grew up and found out there was some actual guy named Frankenstein and the monster never really had a name, and we were all disappointed and part of our youthful innocence died forever) come with a prison and a diabolical machine designed to bring dead flesh to life. And the machine spins when you turn the dial on the back of the building, and the table slides into position when you turn the wheel, and then the light comes on - literally, there's a little LED that pulses when you spin the dial, and it's channeled into this clear plastic rod that flashes onto the monster's head and then crazy Frank turns the wheel again and the monster comes to life just as the heroes roar up to the lab in their modified monster-busting wagon and fire rockets and rip down the walls and... OK, yes, I'm a child. I am a grown-up child. My kids are just glad I don't play with Strawberry Shortcake (though I would, if she had a body count).

Then there's the mummy on his chariot, which is a drawn by a skeletal horse that glows in the dark, and he is pursued by a tough dame with a crossbow who attacks from the sky in her steampunk one-woman helicopter device. Or the monster from the lagoon who is attacked by the two-fisted pulp hero in a swamp boat. Or the train full of ghosts and the heroic warriors chasing it through the night.


Honestly, this is a little edgy for Lego. The vampire hearse comes with a zombie driver, and we all know that zombies are more violent than Sicilian mobsters. There's a werewolf in one set, and as Warren Zevon reminded us, those guys will mutilate little old ladies late at night. The head vampire is concocting a plan to shift the moon out of orbit, and if that happens, I think we can assume humanity is pretty much screwed. Lego has said over and over that they are opposed to violent toys, but I think it's safe to say that is a smokescreen. I mean, they make Star Wars sets. Can you think of something more violent than war? Oh, but that's OK, because it's space. Entire planets are destroyed by genocidal super-weapons, but at least there are no gangsters with tommy-guns.

I'm actually pretty glad that Lego is willing to relax a little on the 'violent toys' thing. The only toys more fun than ones where people die are toys where people die and then come back from the dead, cursed to walk the Earth and feast on the flesh of the living. Seriously, it doesn't get any better than that. And when those awesome violent toys are accompanied by building sets that put every competitor to absolute shame, they are an instant winner in my book.

I bought these Monster Fighter Legos for my birthday with the gift certificate my mom sent me. I haven't been this excited about Legos in a really long time, and I don't care if those Danish engineers want me to call them Lego Bricks because seriously, nobody says that. I'm having more fun building rocket-powered early-century hot rods than I ever have reading a rulebook, and while I definitely enjoyed playing Merchants & Marauders this afternoon, I didn't get to assemble a brilliant mind-control device then play out the battle between the brave heroine and the cruel, sword-wielding mummy until I started playing with toys rated for 14-year-old boys.

It's "bated breath", though the word "bated" is no longer used anywhere else but in this expression. The phrase is from Shakespeare, as it happens.

Fine, I went ahead and stole some images from Lego and put them on my site, just for you. I hope you're happy.

I love Legos. 'Still have much of the Space sets that I obtain 20-odd years ago. Now that I'm a dad with a bad kickstarter habit, it's tough to justify what Lego charges for their plastic goodness. I still cave and buy them "for the kids" during holidays, but they're definitely not a casual purchase.

I understand your frustration with games today. I'm keeping your blog around. I love your writing and Legos ROCK!

I think suitcases full of money sent out to readers isn't too shabby of an idea either...