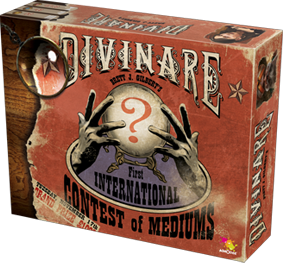 Divinare is a game about being psychic, where you try to figure out how many of each card will be played. It reminds me a lot of another game I play a lot, where I try to guess what my wife actually means when she is saying stuff to me. I suck at that game, because I am neither psychic nor particularly good at interpreting subtle clues that would be obvious to a woman and completely lost on a man.

In Divinare, you're all pretending to be seers who can know things without seeing them. But because you're not actually psychic (well, obviously, I'm not. You might be The Amazing Kreskin), the game has to actually provide you a little information. So you start out holding some cards, and then pass them around the table a lot so that everyone has some idea how many cards are out there. Then every time you play a card, you slap it on your face like Johnny Carson in a turban and decide how many of that color will be played by the end of the game.

This sounds like a game about counting cards, and while that particular skill will help you win, it's not really what the game is about. In reality, Divinare is about bluffing, messing with your opponents' heads, and making suckers out of the other psychics by throwing them all for a loop. Knowing how many blue cards will be played can help; keeping one blue card for your last play is even better, because then you can twist the count at the last minute. That leaves you guessing for green, red and yellow, but that's why you're supposed to also be good at counting cards.

Divinare has ludicrously easy rules, but it is crazy hard to play. For instance, I can't count cards. My head just won't hold the numbers properly. I am sure my son would tell me it's because of my advanced years, but I've never been any good at remembering how many of each card I've seen. This is why I always lose at 500, and why Divinare gives me a headache.

My wife, on the other hand - she can count cards. She can also count the number of times I walk past a dirty glass without taking it into the kitchen. So not only does she usually have a pretty good idea how many of each color card are in the game, but she also is particularly good at storing that glass-ignoring transgression and springing it on me later, when I go to take a nap on the sofa.

And yet I have beaten her at Divinare every time, because while we both thought the game was about counting cards, I realized early on that I would have to make up for my weakness in card counting and do tricky crap to twist the odds. And this is where I realized that I actually really like Divinare, even though I can't count past ten without taking my shoes off. Because, see, it's not a card-counting game, it's a bluffing game, and for some reason, I just love lying to people. Only you don't actually lie out loud in Divinare. You lie by passing the wrong cards, playing the wrong color, or making the wrong sucker bet. Then you hold on to some cards at the end so you can get all honest, but only after the other person, thinking you actually have some idea what you're doing, follows your lead and winds up in a Burmese tiger trap with a bamboo spear shoved up his kidney.

Divinare plays up to four, but it's a different game with two or three. It's a subtle game that requires a lot of planning and smart plays, but the right play with four is a bad call with three or two. With two people, it's actually a lot more intense, as you're not trying to fool a whole group, you're dedicating all your effort to fooling exactly one person. And if that person is my wife, that takes a lot more effort. She's very good at catching me lying, which is why I have to come clean and admit where I was every time I visit a strip club.

On top of being smart and subtle and incredibly tricky to play well, Divinare is absolutely gorgeous. The art on the cards looks like a modified tarot deck, and the box resembles a poster advertising some big event in 1905. There are different character cards, including the Indian mystic, the American confidence man, and the gypsy woman (do not let her shrink you. I am warning you). The art is simply beautiful, and Asmodee has outdone themselves on the visual appeal of this game.

So I am going to keep playing Divinare any time I can talk someone into playing with me, because it's exactly the kind of mentally taxing game that keeps you sharp. I am also going to keep trying to understand what my wife means when she says, 'what do you want for dinner?', but I'm pretty sure I'm going to lose that one every time I don't immediately order Chinese.

Cons:
Might fall flat if you prefer your games with a little high octane

I think Divinare is coming out at Origins, so you should be able to find it in a month or so. If you like games that really make your brain sweat, it's worth a play.
Posted by Matt Drake at 2:57 PM