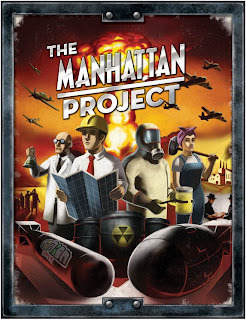 Minion Games had a decidedly rough start. Where a lot of new game companies lead off with a smash hit, they started out with four games, of which two were decent, one was stupid, and one was an absolute travesty. Not to mention the fact that their cards literally fell apart. Basically, the initial offering did not impress.

But they're not quitters over there at Minion, and things are really starting to come together. They've had some good games come out since those early tragedies, and now, with the release of Manhattan Project, Minion Games finally has a flat-out fantastic game. In fact, we played EVO and Manhattan Project this weekend, and had more fun making a-bombs than we did killing dinosaurs.

The theme of Manhattan Project is pretty much what you would expect - it's World War II, and you're all making bombs. The race is on, and the first nation to have their bombs ready to drop is going to win the whole shootin' match. While Einstein and his crew are busy making Fat Man and Little Boy (and his brothers are making bagels), the Germans are hard at work making Existentialist Brooder and Black Turtleneck. Japan, Russia, France and Britian are all in the running to perfect the technology needed to blow giant radioactive holes in the other countries before they wind up pissing glow-in-the-dark KoolAid.

The important thing about Manhattan Project, though, is not what you do, it's how you do it. You start off with a small labor force of untrained workers, and you'll have to school them up to be engineers and scientists. You'll need to build factories, dig mines, and establish universities. You'll refine yellowcake into uranium and uranium into plutonium. You'll call air strikes on your enemies to shut down their enrichment plants, and send spies to sabotage their mines. And just to keep everyone happy, you'll have to send one guy to make beer runs every now and then, because the other guys are so busy.

At first glance, there's so much happening in Manhattan Project that it can be intimidating. But when you realize that all you have to do is tell people where to go to work, it's a lot more manageable. Send your high-school grad to college to get a scientist, then send your scientist to research atomic power. Send another laborer off to mine up some yellowcake, then send an engineer to supervise a factory and make a couple airplanes. Then, since these are government employees, they will all leave work at 3:30 in the afternoon after having spent the day checking out YouTube videos. And when all your people have been allocated, you'll have to spend a turn recalling all your placed laborers so you can do it all again tomorrow.

What happens as the game progresses is that you're essentially building a machine, one that you fuel with your workers to get the output you need to make your bombs. This is a tricky balancing game, where you'll need to get universities and factories, mines and reactors, and you'll need to be careful not to get too many or too few. It requires a solid strategy from the outset, smart timing to take advantage of opponents' weaknesses, and now and then, a little bit of luck.

You'll also have to watch your opponents closely. If one player has a lot of yellowcake, it might be a good idea to bomb his enrichment plants so he can't use it. If another guy has a huge number of fighter planes, you might be best served to beef up your own air force for defense. If someone is looking for money to pay the pizza guy, make sure you're in the bathroom so you can eat for free.

Manhattan Project isn't just the best game to come out of Minion Games since they started, it's also one of the best games I've played in the last month or two. And that's saying a lot, because I've played some pretty awesome games recently. It's intense and exciting, which is especially remarkable from a game with such a European feel to it.

Now, I would be remiss if I threw out a blanket 'buy this game' suggestion for Manhattan Project. While I think an awful lot of gamers are going to love this, it is going to be a bigger hit with people who love Railways of the World than with fans of Last Night on Earth. Plus it can slow down a little with more players, a problem which is just exacerbated by those turns when all you do is pick up your workers and say, 'next.' If you have a short attention span, or only enjoy games where you get to count the bodies, you probably ought to avoid Manhattan Project. But if you like long-term planning and careful strategy, there's a really good chance you'll wind up taking any opportunity you find to build bombs and blow up cities.

Pros:
Brilliant theme - making bombs is awesome
Outstanding components and great art
Planning and strategy mixed with timing and tactics
Tons of grueling decisions
Hilariously awesome interaction that lets you bomb your friends and spy on them

Cons:
Can slow down with too many players (three is probably perfect)
Very little violence (might not be a Con if you're a Quaker)

You can't buy Manhattan Project yet, because it's not out for a few more weeks. But Minion Games has it up for preorder, if you just have to get your mitts on it:
SET UP US THE BOMB
Posted by Matt Drake at 2:49 PM

I playtested this game in 2010 and had a blast at every stage - what I like best is that the "machine" you build each game is a little different depending on what's available, who you're playing against, and so on. It made it really replayable, especially against new groups of people. Glad to see a reviewer having as much fun with it as I did!

woo hoo, and I managed to get the wife "The Swede" included as one of the bomb names as well!

What kind of sick mind can have fun building a bomb, especially an atomic one? Even if it is just a "game"...

Uh, is that a joke? It must be. I have played games where I:

And I'm supposed to feel guilty for enjoying a game about designing a bomb?