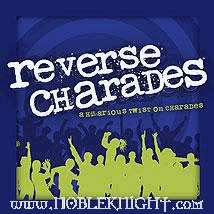 Charades is one of those games that everyone actually likes playing, but nobody will admit to it. It's pretty fun to act out silly phrases and make people guess what you're doing, but the downside is that you look a bit like a horse's ass while you do it. I would say it helps to be drunk, but then, if you're drunk, it's a lot harder to think of ways to act out 'Swiss Family Robinson.' All your audience is going to guess is 'roadside sobriety' and 'oral sex'.

The worst part is, it's not even fair. Everybody gets to sit on the couch and make fun of the one guy rubbing his elbow and spinning his finger to try to get them to say, 'first word'. That one guy is humiliated and mocked, while the rest of the gang sits comfortably and sips their adult beverages. It's lopsided and just plain wrong.

But now there's an answer. Thanks to Reverse Charades, everyone gets to look like an idiot, except one person who has to look even stupider because he can't figure out 'sideburns' from four people pointing to a picture of Elvis. Instead of everybody laughing at one person, now everybody gets to laugh at themselves. Obviously, that's an improvement.

Basically, Reverse Charades is very similar to regular charades, in that Reverse Charades really is just charades. You just have more people doing the acting. So you see, now it's a totally new game.

Honestly, the best thing about Reverse Charades is the cards that come in the box. The theory is fun enough, and allows multiple people to be mocked at the same time, but the upside to the game is that you don't have to spends half the night trying to think of something the other team can't guess. This leaves more time for playing, which translates to more time spent looking like a baboon with a cattle prod stapled to his shiny blue ass.

If you need a way to entertain a good-sized crowd of people who have very little self-respect or a very high tolerance for public humiliation, consider picking up a copy of Reverse Charades. The way the game works means you have to have six people to play it, but if you can all relax and let yourself look like dorks for a little while, you could have a really good time.

Hey! Look at that! Noble Knight Games is carrying Reverse Charades, so if you're going to buy the game, do me a big favor and buy it there. And tell them I sent you:
LOOK LIKE A BABOON
Posted by Matt Drake at 1:03 PM