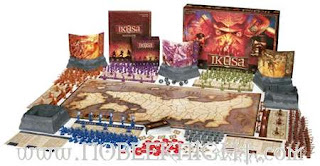 A long time ago (well, a long time ago in Internet years) I reviewed Shogun, the old 1984 Gamemaster Series game where everyone sets out to conquer feudal Japan using samurai soldiers and peasants carrying antique firearms. The summary was that I liked it, but couldn't describe the ending because I was never able to finish a game. I even took it to GenCon and set up for a marathon 5-player game, and then one of my pinhead friends spilled a rum and coke on it. We got it cleaned up, but we didn't try to play again, probably so that I didn't throttle my friend or try to stab him with the little plastic swords.

Happily, Wizards of the Coast decided I needed another excuse to try it again, and so they reprinted the game again. (This is the second reprint. The first reprint was called Samurai Swords, and happened about 15 years ago.) They made it even more gorgeous than the first one, but used the same rules. Hey, if it ain't broke, don't fix it, I guess.

In order to differentiate the new, incredibly-gorgeous version of the game from the old, somewhat-less-gorgeous version, they renamed it Ikusa. They chose the name primarily so it would be confused with a Swedish furniture manufacturer, and it worked. When I first opened the game, I expected to see language-independent instructions and a box full of pressboard and metal screws. I was happy to see a game inside, though I still need a stylish and trendy way to store Hustler back issues.

The rules for Ikusa are pretty easy, although there will be enough of them to make you spend half an hour explaining them, and even then someone at the table will still try to assassinate your general on his first turn. If you've played any number of what the Fortress AT guys call 'dudes on a map' games, all the movement and battling and what-not will be pretty easy to follow. So if you're trying to figure out if you should buy Ikusa, then what you need to know is what makes it different from any other world conquest game.

The biggest difference between Ikusa and other land-grab battle games is that the map is very linear. Understanding how the map affects tactics and strategy is painfully important to doing well at this game, because it can be more important to hole up at either end of the map than to try and hold territories you can't reinforce. If you're stuck in the middle, you'll be fighting a two-front war, and that's rarely a very good idea. Ask the Germans how it worked out for them.

Another thing that sets Ikusa apart from the masses is the fact that you really only get three armies. You can have provincial forces, but these can be, at most, five guys, and a solid army will plow them under like a fall harvest. That means that you have to really consider defense and offense at the same time, unlike many games where the best defense is a good kick in the family jewels (in fact, you may be surprised at how often that's a good defense. Try it the next time your boss asks why you're late to work. Bet he doesn't ask that one again!). When you only have three serious threats, determining how to use them is critically important. Waste them or put them in the wrong place, and you'll be setting yourself up to fail. Or maybe get one of those nut kick defenses.

You've also got ronin, which are surprise forces that can be deployed anywhere, secretly, but only stick around for the turn you hire them. That makes it tricky to use them properly, but they can seriously turn the tide when you're worried about an opponent's aggressive stance. Throw in a ninja who can spy on your enemies or kill their generals, and you've got an exciting, old-fashioned mud-stomp of a board game.

Of course, since Ikusa is a large-scale war game, there's no way you'll finish in an hour. You might finish in three, if you're fast and someone runs away with an early lead, but you really should plan on being there a while once you set up. Everybody needs to remember to use the bathroom before the game starts, for example, and don't start if you're hungry. Under no circumstances should you allow rum and coke at the table, unless you're prepared to stab someone with an actual samurai sword. Especially if the creator of the game signed your copy less than an hour before the drink-spilling incident, and it's a 25-year-old classic collectible that is going to smell like cane sugar and booze until ants carry it out of your office so they can have a party in the box lid.

Everything about Ikusa is a visual improvement on the original Shogun, with two notable exceptions. First, the old game used to include a big styrofoam bin for storing the coins and castles and samurai and stuff. The new ones has a cardboard box. That's not as cool. Second, and this is important, there are no swords.

The original Shogun had players bidding for turn order, and if you won, you collected the first-player sword. Other players would get other swords, and the sword you had told people when you would go. There were these little stands that held the sword out in front of you. It was completely unnecessary, but totally awesome. And the new game does not have swords. It has cardboard diamonds with numbers on them. That is not as cool. In fact, I would go so far as to say that it is not cool at all.

If you have the original Shogun, or the reprint called Samurai Swords, there's not much reason to get Ikusa, outside the fact that it is incredibly easy on the eyes. The art is just plain fantastic, and the components are higher in quality than the original, but there are no differences in the rules, and the game will play exactly the same. However, if you're having trouble finding an older version of this great classic game, or if you don't mind the missing swords, then this reprint could be exactly what you need. If you want to stomp around a big map, hiring armies and spilling the blood of tiny plastic soldiers, Ikusa is one hell of a fun way to get it done.

Pros:
Lots of innovative additions to one of my favorite kinds of game
Just plain gorgeous
Brilliant and strategic, with all the stuff you love about war

Cons:
Linear map can punish the unlucky or unwise
I wish it still had those bitchin' swords

Need a good deal on this awesome game? I just happen to know where you can find one - Noble Knight Games!
BUY THIS AWESOME GAME

Great review as usual. This game is one of my favorites - I have a copy of the version called "Shogun" that I snagged on eBay a few years ago.

Another advantage of the reprint is that they replaced the pink plastic pieces with brown plastic. That's a nice touch if the fifth player wants his dudes to look tough on the map.

I going to man up and up and take the public beating I deserve....I am that pinhead.

Yeah, but you're a lovable pinhead, so we let it ride and just remind you of it every six weeks.

I had to go back to your archives for this, now that I have all the GameMaster Series reprints...the way to get back the cool "Swords" for bidding, is to go to any Japanese gift store, and buy 3 sets of 'Katana' Chopsticks, then with a fine brush, and white paint, paint (or etch, if you have a Dremel Tool) the diamonds on, to show turn orders. Get some cheap but nice looking chopstick holders to serve as the Styrofoam swordholder for each player.