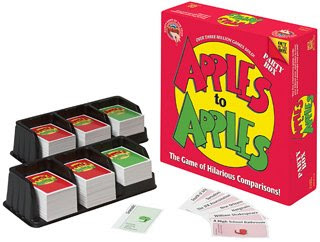 There's an old saying that says, '50 million Americans can't be wrong.' Predictably, it's an advertising slogan. People will say anything when they're trying to sell you something.

The cover of Apples to Apples boasts quite happily that it has sold three million copies. That's not 50 million, but it sure ain't peanuts. That's an awful lot of games sold. For the sake of comparison, if every person who had a copy of Apples to Apples were to read this review on the same day, my email would be flooded with hate mail.

Because I'm going to swim upstream here. I'm going against the grain. I'm bucking the system. I'm a maverick. If I need to, I'll even invent new stupid cliches, because I really don't see why anyone likes Apples to Apples.

There are no rules as to how the judge decides which red apple fits the green apple the best. If the green apple card says, 'Harmful' and you pick 'Penguins', the judge might choose that over nuclear bombs and the electric chair, just because it makes her laugh (yes, I said her. Because where I usually use the more correct male pronoun, in this case, there's every likelihood a woman wanted to play this game. Real men want to play stuff where people die).

The green apple card goes to the player who picked out the match the judge liked. If you get a certain number of green apple cards (the exact number depends on the size of your crowd), you win.

You might be reading this and thinking, 'that actually sounds pretty fun,' or 'wow, what a clever idea.' If you are thinking that while you read this, bang your head on something really hard, then check with your doctor to see if you have a brain tumor. Because that's not a game, it's a word-association exercise with an incredibly limited vocabulary. In fact, that's really my problem with Apples to Apples - there's just no game here. There might be an inane conversation, there might be some giggles, but there's no game.

Apples to Apples is just stupid. My family picked up this stupid game because so many people rave about how much fun it is. And having played it twice (and being unwilling to finish it the second time), we have determined that not only can 50 million Americans be wrong, the three million who thought this game was a good idea are quite possibly simpletons.

I fully expect to get a huge pile of negative feedback for this review. I didn't write it just to be provocative, though. I mean, I don't mind having people send me hate mail, but I really wrote this review because someone ought to stand up and say, 'Enough is enough! This is not a good game!' It's like a public service announcement, and sometimes you have to just bite the bullet and say something the public won't like. Cigarettes give you cancer, kids, and Apples to Apples is a waste of money and time.

Cons:
I don't know why anyone likes it

No link today. I'm going to be taking enough heat as it is, without linking to a site about laxative suppositories.

Oh, who am I kidding. This is my favorite part.
http://www.shopinprivate.com/dullaxsup50.html
Posted by Matt Drake at 5:34 PM

Apples to Apples with the wrong people... like the too-serious, or the super-competitive, or the incredibly stupid... can make this game intolerable. But played with friends and friendly people, those who want to have fun and don't care about the winning or the losing, it can be the best investment you've ever made. In my sessions I couldn't tell you who won or lost which hands, but I could tell you how hard we all laughed.

Doesn't sound like a game to me either, thanks for pointing that out. Party games are suppose to be more social, I think, then fun or challenging? This sounds like a great game for some people, but I will try and avoid it. It isn't anything you have to actually think about either. I have heard lots on this one and just figured it to be a party game and nothing more, and it is!

Some people hate to hear the truth - too bad.

It is true that the judge mechanic is quite subjective, but it isn't all bad either. Last time I played this game, I won because I know the people I play with. I know their taste in movies, food and humor and can find the proper combinations that will surely tickle their fancy. ATA forces you to know your friends and make guesses about what they'll find amusing. It actually is a good party game when you consider the point of it is to interact socially and pass the time with a stress-free activity.

So, you're wrong this time. But in your ivory tower, you're entitled to your old fart opinion as much as I am to my brainwashed one. ;)

Hey IMax, thanks for my copy of Apples to Apples!
LOL

I have never played Apples to Apples, but Enrique is a pompous idiot.

Easy, killer. I know Enrique, and he's a good guy. He's as entitled to his opinion as I am to mine. He's no idiot, and what's more, he has the testicles to put his name on his posts, which is more than I can say for you.

Oh Jesus...I clicked the link and now I can't stop the fits of laughter

I wholeheartedly agree with you. Apple to Apples is THE stupidest "game" on the planet. We tried playing it tonight for the first time as a "fun family activity", & it went horribly wrong. I guess most of us are people with brains, & the subjective nature of the judging made it SO not fun. Why bother calling it Apples to Apples? It should be called Inane Word Association. wWhat a colossal waste of 30 bucks! In the trash it goes!

I bought the game because everyone said it was the "best game ever". More like, "Biggest waste of $20 ever".
I played with 5 people, we didn't laugh once. We wondered if we were reading the directions wrong because it was so UN-fun, that certainly, we must have been playing wrong. Nope. We ended the game and played Mad Gab. Trusty, reliable, fun Mad Gab.

I also believe this is an incredibly stupid game. I get that it is supposed to be a social party game, but the arbitrariness of it makes it repetitive and frankly, boring. I see how it works in the sense that an unlimited amount of people can play, you dont really need a table, etc. But the lack of any true competition, even friendly fun competition, because of the subjectiveness of who wins each round takes away the fun if you ask me. You might as well put all your red cards into a hat and the "judge" picks who wins. I really do not get the appeal, especially with all adults playing. I think the fun of party games is the competing and the associated smack talking.

Big board gamer here, found your site on Google recently, and I'm enjoying it.

For something that's categorically a party game, Apples to Apples slows a party down. I hate to so obviously pimp a review I did, but we pretty much agree. http://jasona1.blogspot.com/2011/03/apples-to-apples-1999.html

It's anti-fun. It's funny how A2A supporters often say haters of the game just don't have a sense of humor. I'd like to see those same people pay to watch a comedian work the same "humor" found here. "I think teddy bears are DANGEROUS! I think flan is INTRIGUING! AHAHAHAHA."

one of the Anonymous wrote:
"I think the fun of party games is the competing and the associated smack talking."

You weren't smack talking during A2A?