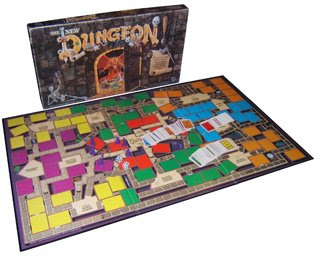 I've been wanting to do a series of dungeon reviews for a while now. Dungeon crawl games are near the top of my favorite kinds of games - the combination of light role-playing and tactical combat mean 'fun' to me. So for the next two weeks, I'll cover these games right here:

We'll start with an oldie but a goodie - Dungeon. The name may not be original, but at least it's got some truth in advertising. You'll assume the role of one of a handful of dungeon delvers and spelunk your way through a progressively dangerous dungeon. The goal is to pick up money and treasure and work your way up to the big boss critters - sure, you can wade through giant rats like a high-school bully stealing lunch money from grade-school nerds, but you may want to reconsider taking on the dragon before you've got some kills under your belt.

Dungeon is the least creative and expandable of the dungeon crawl games I listed above. The board represents a dungeon with a layout that never changes - the skeletons and goblins will always be hiding in the red rooms, and you won't score the really great treasure until you get past the yellow and purple rooms.

Combat is pretty basic. Each monster has six different numbers on the card, in six different colors. Different adventurers using different weapons (including magic) have to beat different numbers. For instance, warriors use the red number, which tends to be pretty low. The thief attacks on green, which tends to be considerably higher than the red. You roll two dice and if you beat your number, you kill the monster. Roll lower, and you have to roll again to see how badly the monster whipped your ass.

Turns tend to be fairly quick. You race your fellow adventurers from room to room like rats scurrying to hit the feeder bar at the next station. You collect a little treasure after each kill, and in some cases, even ambush the other dungeon delvers to steal their stuff. If you get enough treasure, the game is over and you win.

Dungeon is fun, but it's not much of a classic dungeon crawl-style game. Think D&D with all the interesting rules stripped out, the dungeon master replaced with a simplistic combat mechanic, and no cooperation with your fellow players. Come to think of it, that pretty closely resembles how we used to play D&D when I was a kid, which might explain why I like playing Dungeon - it's not really a good game, but it brings back some great memories of killing things and stealing their stuff.

Dungeon also doesn't tell a story, really, and it doesn't make much sense. There's no rhyme or reason to why a goblin might be in the closed-off room next to a giant lizard, or why the green slime is guarding a jade idol. This also reminds me of playing D&D as a kid - the stupid kobolds had a stone golem in one room and a horde of flesh-eating spiders in another, yet they kept their best treasure behind the dried fish in the pantry. And they never had bathrooms.

One enormous downfall to Dungeon is that, as you get close to winning, it's ridiculously easy to lose. You might be one gold ring short of winning the game, go into a room to fight a troll, and wind up getting knocked out and losing everything. Without gear, you're back to being as weak as a new adventurer, but all the rats and kobolds are dead now so you don't even have any chance of finding another magic sword. Your opponents can converge on your juicy pile of booty, and as long as they can kill the troll, they'll win the game without having to do much of anything.

But despite lots of drawbacks and inconsistencies, I still drag Dungeon out and play it now and then. My kids can get into it, I can play while I watch TV, and it's fun to remember the days when I was ten years old playing an enormous barbarian warrior with horrible hygiene and a taste for expensive jewelry. We would tromp around nonsensical dungeons, slaughtering lizard-men and orcs, goblins and shark people, and then run off with all their stuff.

Dungeon isn't a mature game, or even a very good game, but it can still be fun, and I wouldn't part with my copy for anything like reasonable money.

Pros:
Happy trip down memory lane
Easy to learn
Easy to play
Whatever its faults, it is, after all, a dungeon crawl game

Cons:
Not even an attempt at consistency
Arbitrary combat rules don't make for exciting fights
No story, just killing and collecting

I can't get you a link for this one. You can try eBay, and you might be able to find a copy at the thrift store, but it's really, really out of print.
Posted by Matt Drake at 11:04 AM

I guess I didn't miss much on this one, Kids game - gotta be simple, at least we like the theme.

I look forward to these reviews. I had Heroquest and Dark World as a kid, but I've never played them (I liked all the pieces, but didn't have anyone to play with).