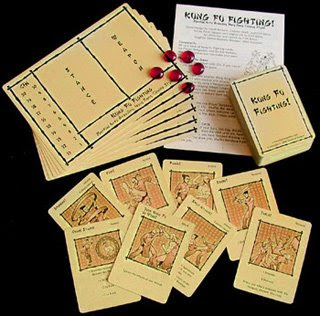 Slugfest Week continues, and for my second entry this week, I bring you Kung Fu Fighting. And yes, I will be peppering this review to references to the one-hit wonder song of the same name.

Kung Fu Fighting is extremely similar to En Garde, in that the goal is to beat the crap out of your friends. But instead of all that prancing around, with your parrying and riposting and maintaining poise, you're trying to keep your Chi up while you bring your opponents' Chi down. In Kung Fu Fighting, players are opposing kung fu fighters, like funky Billy Chin and little Sammy Chung, and they all take turns beating on each other. The art on the cards makes it obvious that the game is taking place in an older China, and therefore not in funky Chinatown.

Every player starts off with 20 Chi and a handful of cards. Just like in En Garde, you play an attack on your turn - but now there's a twist. If you don't have an attack card, but you have a weapon, you can play that instead. You can attack without a card if you have a weapon, and these weapons tend to do a little more damage than a simple punch in the face. And because this is kung fu and not fencing school, you get to use stuff like chairs and tables in addition to swords and staffs.

And if that wasn't enough, now you also add in stances. Drop into drunken stance, drink some rice wine, throw out some wild kicks and add a combo for a chair to the face, then withdraw into snake stance for the defense bonus. Those two card types - weapons and stances - add a whole lot more depth to the basic En Garde template. You're still just going after one stat - the Chi - but now you've got all these wicked card combos to do it. In fact, where before you really just played what you had in your hand, now you might hold on to something for later. You can actually balance your hand a little better now, and use things when you can link them together. Now you can fight with expert timing.

The combinations also allow you to dish out a lot of pain in a hurry. You can play a combination attack to do a flying punch sword kick, and if you do it from the right stance, you could take away half of an opponent's Chi in one whirling attack. Now that's a little bit frightening.

There are some devastating combinations in this game, but there are some incredible counter attacks. No longer can you simply pick on the guy with only two cards; if you drop four or five for a combination attack, and that guy breaks out the card that says, 'Your Kung Fu Is No Match for Mine', he can come back and beat you senseless when your defenses are down.

Lots of attack enhancements make Kung Fu Fighting more interesting than En Garde. For instance, your opponents might come at you with a magnificent fast punch, and if they do it from snake stance, then it'll really hurt, because they'll be fast as lightning. And it'll hurt more, too.

En Garde is a shallow game, but it was a good start. If you like the concept, but want a little more pizazz, Kung Fu Fighting should be right up your alley. There's still a lot of luck involved - tough to defend those invincible kicks when you just drew seven attack enhancements - but now there are so many great ways to use what you've got. It's a lot more interesting than En Garde, plus you can hum bad disco while you play.

Cons:
Still a lot of luck

Go here and get this game, and at your next game day, everybody can be Kung Fu Fighting:
http://www.slugfestgames.com/games_kff.php
Posted by Matt Drake at 9:15 PM

As it turns out I just downloaded KFF off Itunes to use in a cub scout video. The theme for the dinner was Chinese New Year and I just had to put in KFF and the theme from Enter the Dragon...

So should I get this or Herocard Samurai???

I can only comment on the Herocard mechanic, as opposed to the whole game, because I haven't played Rise of the Shogun. I like the concept behind the mechanic, but don't know how sound the game is.

I do know I like Kung Fu Fighting. I don't know if I like Rise of the Shogun.

But hell, they're both cheap.

I generally like Kung Fu Fighting. Very straightforward game and very pleasing when a big combo puts a hurtin' on your opponent, and even more pleasing when you're able to block one of those nasty combos.