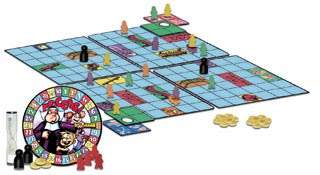 If you're a gamer nerd like myself, you might remember grade-school recess with a mix of humiliation and horror. You might remember regular fisticuffs, dirt in your hair, and taunting by girls. You might also remember wishing you could kiss the big bully's girlfriend, but then, you also knew that just thinking that meant that you were very likely going to wind up nursing a black eye and hanging by your underpants from a towel hook.

And just because Atlas Games knows how much we all miss those halcyon days of abuse by kids with hormonal imbalances, they've provided us with a special treat called Recess. This is a game where you have two goals: make out with a girl and beat the crap out of other kids in order to steal their lunch money. Yep, that's pretty much how I remember recess... except for the part where the girls didn't even want to talk to me, much less kiss me, and the kid losing his lunch money to those oversized gland conditions was me.

Recess takes place at a parochial school, complete with two nuns to watch the playground. Each player gets two boys and two girls, and they set them up at opposite ends of the playground. On your turn, you can move one piece three spaces, another piece two spaces, and a third kid just one. Then you move a nun, and those nuns can haul ass, so you can move them as far as you want.

To start a fight, you just move one of your kids onto one of your opponent's kids. The attacker takes a coin from the victim, and the victim falls down and gets dirt in his or her hair. In old-school tradition, the girls can get in just as many fights as the boys. This must be a pretty rough parochial school, because when we played, the girls were involved in a disturbingly high number of assaults.

Playground equipment blocks movement and visibility all over the board, so it's best to start a fight when a nun can't see you. And if someone ends their turn on a space with a nun and tattles on your little fracas, one of your kids is going to time out.

The big maneuver, though, is to try to get one of your boys in a space with one of your girls in a place where the nuns can't see you. Apparently the nuns don't mind nearly as much if you beat the unholy stuffing out of your classmates, but God and Heaven forbid you should lock lips. Fighting is bad, but public displays of affection are grounds for justifiable homicide.

If you can manage to arrange a rendezvous before recess ends, the game stops and everyone gives you two coins for managing to beat the odds and unite two star-crossed sixth-graders. If recess ends first (you get 30 minutes, tracked on a little spinning timer), then everyone goes back to class, and you'll just have to satisfy yourself with passing notes that the teachers intercept and then call you up to the front of the class to make you read them out loud.

The winner is the player with the most lunch money. Getting into fights is really, really easy, and getting two kids to smooch is really hard. So if you really want to win, the best strategy is to keep your kids clustered up, running in packs so they can start multiple fights every turn and protect themselves when the other kids come after them. Come to think of it, Recess isn't so much like my sixth grade. It's like West Side Story.

Recess plays very fast. You can finish a whole game in about 20 minutes, and thanks to the included sand timer, it won't last more than 30-40 minutes. It's a pretty clever game, and requires a good bit of planning ahead and maneuvering. If you really play well, you can wrap up your opponents' kids in fights, protect your own with nuns, and haul those two kids to their prepubescent make-out session.

And best of all, you get to be the cool kids. Unless you were one of those kids with a unibrow and a lower jaw that stuck out too far, this might be just the opportunity you've been wanting. Finally it's your turn to steal the lunch money and kiss the girl.

Cons:
Can get really repetitive, really fast
Not much depth

If you want to recreate your own grade school, but from the winning side, go here and get a copy of Recess:
http://www.atlas-games.com/product_tables/AG1290.php
Posted by Matt Drake at 8:49 PM

Nice review. Sounds like an entertaining game with a really fresh theme.

Glory Days! Oh the good old days when you could beat people up, call a kid a fag, and chase around the girl that has the biggest " Tracks of Land ". I was the bully , although I wasn't the biggest, having 4 older brothers beat you up all the time seems to harden ones exterior to the extent that kids your own age just don't seem to be hitting you very hard!
SOunds like a great Beer and PRetzel game, I like the time table for it, 20 - 40 minutes.

I am adding this to my wish list just to check it out.
How does it play out with kids?