Board Game Review - In the Year of the Dragon 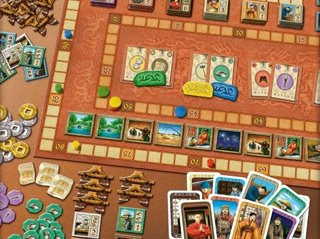 I know Euro games aren't supposed to be about violent conflict, so I was delighted to find out that In the Year of the Dragon from Rio Grande has an atrocious number of deaths, often in fairly ugly ways. It's still a Euro game, so you don't get to kill your fellow players, but you sure can run up a body count of tax collectors and hookers.

Each player in this game represents a Chinese prince doing his best to get through what has to be the worst year ever. January and February go fine, and then everything goes to Hell in a handbasket. There are famines, plagues, and Mongol invasions. And while your country is being torn to pieces by internal and external strife, the emperor still wants his taxes and the citizens still want their festivals. It's a giant balancing act just keeping everyone alive, much less paying your bills.

At the beginning of every turn, you get a chance to up your revenue, improve your stores, or just impress the emperor with your wit and classic charm. The problem is, if you want to do the same thing as one of the other princes, the emperor has a 'doing the same thing as another prince' tax, and he gets to bill you. You can gather rice, make fireworks, put on a military parade, collect taxes or other things that are boring in American games but are the bread and butter of European games.

Then you hire people. At first you don't get to kill them - if you can fit them in a palace, they're fine, and they'll work for you as well as they know how. Farmers will let you gather more rice, healers will combat the plague, and whores (known in the game as 'court ladies') will make the emperor like you more. There are nine different kinds of people to hire, from soldiers and tax collectors to monks and scholars. Every one of them has a different job, and none are unimportant in your quest to come out ahead of the other princes.

The problem with hiring people is that you can wind up with one hell of a housing shortage. If you don't have room in a palace, you have to fire one of your people who is already there. Then the guy you just fired goes and hangs himself in the attic. Nothing says, 'Ameritrash' like a tax collector stretching his neck from a ceiling beam, but I swear this is a Euro game. Some people might say, 'hey, the game doesn't say you kill him!' Oh yeah? Well, if that's the case, explain why the guy is permanently removed from the game. He's out of the employment pool. It doesn't matter if he winds up getting rolled for his spare change and left to die in a pool of his own blood, or if he falls on his sword - either way, he's not looking for work any more.

After you hire people, then Something Happens. For two months, that Something is peace, which means nothing happens, but after that it gets interesting. You've got three dangerous events and two that aren't as bad, and each one happens twice. The safer events aren't even all that safe - if you can't pay your taxes, you have to behead one of your helpers for failing to pull in the required revenue. The emperor is really a dick like that.

It's funny, though, Mongol invasions are less threatening than famine. Apparently these are limp-wristed Mongols, because only the person with the fewest warriors loses anyone, and even then they only lose one person. And you can choose who has to stay behind to have the Mongols cut out his liver and eat it with fava beans. I like to use the scholars for that. Frigging academics.

Famine and plague are the worst. You can lose lots of helpers to famine or plague. If you don't have enough rice, your already-anorexic 'court ladies' starve to death and wind up being food for nearby hungry rats - and then the emperor is not quite as impressed with them. And if the plague hits and you don't have enough healers, you get to choose which of your employees winds up with a terminal case of hepatitis A. It could be a lot of them, so it's not a bad idea to bolster the ranks with enough doctors to tell everyone to wash their hands after they leave the toilet.

To simulate each prince's ability to manage his little corner of the kingdom, players earn victory points at the end of every round and at the end of the game. So if you have scholars earning you victory points all the time, it might be worth letting them live when the Mongols come and instead giving up the fireworks tech - especially if you have enough fireworks for the big Dragon festival. You can shoot off the fireworks while the Mongols cut off his head.

Even though there's a really kick-ass body count in In the Year of the Dragon, it's still pretty obviously a Euro game. There's a victory point scoring track. There's almost no luck. It's really hard to screw your opponents. It's all strategy and decision making, and no positioning or tactics. You never roll dice, and when you play cards, you get to look at your whole deck first. But then it's got a very good theme, and one that sticks to the rules very well. It's like a compromise - rope in the Ameritrashers with a high body count and cool theme, and keep the Euro gamers around with a little resource management and tough decision-making.

I was skeptical when I read the rules for the game, but after just a couple games, I've found myself a pretty big fan of In the Year of the Dragon. Especially once the bodies started piling up.

Pros:
Lots of strategy
Tons of planning and forethought
Bodies stacked up like cordwood
Virtually no luck at all

Cons:
Rules are confusing - you have to play it a couple times to get the hang of it
Extremely punishing for early game mistakes

If you like games where people die, or if you like resource management and games with no luck, get this game. Here's a link:
http://www.funagain.com/control/product/~product_id=018318
Posted by Matt Drake at 6:02 PM

Well Matt, that little rant I think did you very good, cause that is one of the best reviews I have read in a long long time. Just good stuff, I for one am sold, and will be buying this game - besides making me laugh out loud a few times, I feel I somewhat understand the rules. I like the fact that you mention the rules are tough, that way when it takes me like 5 games to get it I won't feel so bad.

Can't wait for the next review this one was so good.
Could it be you just redid your page a little bit ( it looks really nice ) you got lots of free advertising go up and you are stepping it up a notch cause there are so many fricking bloggers out there reviewing games? he he.