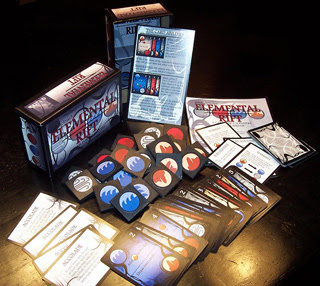 An elemental rift is what you get when you eat a lot of Taco Bell. Your stomach gets a little queasy, you can feel the gas building up, and then when you finally relax your butt cheeks, you break one hell of an elemental rift. You know what I'm talking about. And you know full well you can't blame that on the dog.

Coincidentally, an elemental rift is also a metaphysical pool of the four basic magical elements - water, earth, wind and fire (which, without the water, is a fantastically horrible nouveau jazz band). Sorcerers cast spells to manipulate the elements in the rift, and use the released energy to power more spells. And if the game called Elemental Rift is any indicator, the goal of casting all those spells is to make the other sorcerers see how impressive you are. It's like writing a dissertation, but for wizards.

Spell cards include two sets of information - casting cost and effect, and failure triggers. To cast a spell, you have to decay the required quantity of the indicated element. Elements decay by removing the requisite number and replacing half of those tiles with a new element. For instance, to decay four fire tiles, you remove them from the rift and replace them with two earth element tiles. This allows the sorcerer to carry out the effect of the card, which is generally to manipulate the rift, though sometimes it allows the sorcerer to call on a wider selection of spells (you know, by drawing more cards).

These spells remain active in front of the player after they're cast, but they fizzle and die when the rift displays the correct number of elements in a row. For instance, if your trigger is four earth, then when there are four earth next to one another in the rift, the trigger occurs. This can be fairly chaotic - it might remove all of one element in the rift, or turn one element into something else, or it might just let you access more spells (yeah, by drawing cards). It also means that spell's not active any more.

The purpose of all this spellcasting and manipulation is to earn the respect of your peers, as dictated by specific accolades. You might earn an accolade if, at the end of your turn, you have four spells active (no mean feat, considering the instability of these things). You might be able to reduce the rift to one element, which earns you an accolade. There are several of these accolades to earn, so while one player is working to get three spells of the same element in play, another might be working to make sure there are six linked elements in the rift.

You win the game if you can start your turn with two accolades. It's important to note that you have to start with two, not end with them. After you build up your accolades, the other sorcerers have one round of playing to take those accolades from you. Creating the fast food version of an elemental rift is not covered in the rules, but keeping in mind the detriment to everyone in the room (not to mention potted plants and livestock), it's generally considered bad form to try to gas your opponents out of the game.

So that's basically how you play the game, but what's important here is the big question - is it fun? Well, anyone who has walked into the bathroom after a fast-food meltdown can tell you that the more crass definition of an elemental rift is certainly not entertaining, and can actually damage your nostril hairs. On the other hand, the Elemental Rift created by Small Box Games does not stink at all, and is, in fact, brilliant.

I'm going to drop out of the bathroom humor here for a second and crow about this game. See, when you get a Small Box Game, you're not looking at your average board game. So many games can be pigeonholed into categories - resource management, bidding, tile placement, or tactical recreation, for example. But Small Box Games are so unique and clever that when you read the rules and start playing one, you quickly realize that this is not like something you've done before. It's not just a pretty version of another game, or a rules clean-up, or a new entry into a genre. This is a whole new beast.

And at least in the case of Elemental Rift, it's a total blast. The game will make you think so hard that you'll be mentally exhausted when it's done. You'll be holding three cards, putting together combinations to see if you can play them all, examining trigger effects and spell effects and accolades and making sure the other guys can't win, and before you know it you need a nap.

I played one game with my kids, who are 11 and 12. When we were done, my daughter said, 'this sure isn't a game for stupid people.' She may have been bragging because she won, but she had a point - Elemental Rift will punish those who lack foresight or are too lazy to examine the entire play field. I don't know how many times my son said, 'oh, man, I forgot about that.' That's probably why he lost. I lost because I pushed too hard, and when I finally managed to get a really huge lead, I left too many openings for my daughter to swipe the win out from under me.

So you see, there are two kinds of elemental rift, and they are not at all alike. One is created by Small Box Games, and is a great game that does not stink at all. The other is considerably less pleasant to experience. While you can get either one for about 20 bucks, one will fill a room with happy gamers, and the other will clear it.

Cons:
Tricky to figure out the first couple games
Feels very Euro (only a con if you hate Euros)

Great Review, I am glad to see the Next SBG is as good as the last. Sounds like a great game, add another to the wish list!

It really is a unique experience. I'm looking forward to what happens with the game after everyone has had a bunch of plays and some firm strategies start to emerge.