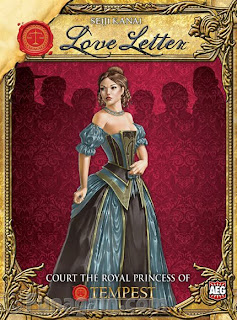 A few weeks ago, I reviewed a game called Courtier, and mentioned how this was the first chapter in a series of games that, when put together, told a story about the evolving city-state of Tempest. In case you don't feel like jumping over to that review, I'll recap:

Courtier is fun.
The story idea is fantastic.
The game ends when the queen gets arrested.

There's actually more in that review (or I couldn't very accurately call it a review), but those are the salient parts for this review.

Depending on how you want to rate these things, Love Letter is either the second game out of four, or a sort of plug-in wedged between the first and second. It doesn't really seem to fit in the series - the other three all have Latin-sounding names (and not like Geraldo Rivera Latin, more like Semper Fidelis Latin), they all have the same size box, and they are all rather weight board games. Love Letter, by comparison, obviously does not have a Latin name (either racially or linguistically), comes in a cloth bag, and is a light card game. Which explains why Alderac didn't make it an 'official' part of the Tempest series.

However, Love Letter definitely takes place in Tempest. It even furthers the story. You're all suitors attempting to cheer up the princess after her mom gets thrown in the hoosegow (supposedly she committed treason, but I'm pretty sure she was set up). To make the princess smile, you're trying to get your love letter into her hands. Her guards - and the other players - all want to make sure you fail. In terms of the timeline, this takes place between Courtier (the first game) and Mercante (the second game). It's kind of like a special episode of Friends that takes place between when the gang meets up for coffee and witty banter and the next time the gang meets up for coffee and witty banter.

What ensues is a delightfully cutthroat card game that plays out in less than twenty minutes and leaves everyone laughing just a little. It's ridiculously straightforward - on your turn, you draw a card, then play a card. You only start with one card, so when you're playing, you're limited to a choice of two cards. This might seem like Love Letter has a lot of luck, and if it does, then kudos, you're very perceptive. Have a gold star.

That heaping helping of luck is why a game this deliberately cutthroat still keeps everyone smiling. Sure, you hosed your daughter out of the last point she needed to win, but she knows you didn't have any choice. It was that or discard the princess, and automatically lose the round. So you had to play the guard, guess the countess, and kick her out of the round. Those are the breaks.

Theoretically, the goal of Love Letter is to have the character closest to the princess holding your love letter at the end of the round, because that's the letter she gets. However, in practice, the goal of the game is to boot every other player by finding their love letters and making sure they wind up in the wood chipper (the letters, not the players - it is bad form to put your fellow games into wood chippers). There are so many ways to get knocked out of a round that sometimes you don't even need any help. Sometimes you're stuck holding a card that knocks you out if you play it, and a card that forces you to play your other card.

But like I said, those are the breaks, and Love Letter is a surprisingly fun game, even though it is almost too light to even be part of the the Tempest series. Where the other three games have more meat than a barbecue buffet, Love Letter is a handful of popcorn. But it's fun popcorn, like the kind that comes in the big bucket and has cheese or chocolate or butterscotch, and after two days the only thing left in there is the cheese popcorn because your co-workers are pigs. Greedy, greedy pigs.

One more point here - the Tempest series of games is so well-developed and deep, with an obvious history and an enormous cast of characters, that I would really love to read fiction taking place in this city. Fiction based on Love Letter would be less compelling than Fifty Shades of Twilight, but all the intrigue and backstabbing in the other games would make for fascinating reading, if it was written by someone competent (and by 'someone competent', I mean 'not that lady who wrote Hunger Games').

I think I'm going to make this Tempest Week. My other two reviews this week will cover Mercante and Dominare. By the end, I'll be repeating the same jokes so many times you'll all leave and go read those dry-as-a-mattress reviews at BGG just for variety. So come back Wednesday and I'll see if I can't make you yell at your monitor, 'You used that one already!'

Pros:
Quick and light-hearted card game
Fast and fun, with some opportunity for smart card play
Beautiful art
Wonderfully cutthroat without making anyone mad at you

Cons:
Heavy on luck, with virtually no strategy

It took some looking to find a copy of this anywhere, but you can get it at Funagain for just ten bucks. Perfect if you're trying to push up for a shipping discount, but worth it all by itself.
https://www.funagain.com/control/product?product_id=027097
Posted by Matt Drake at 5:36 PM