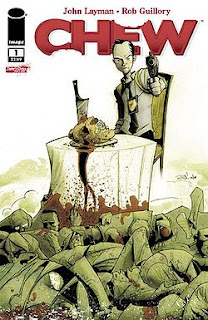 I'm at BGG Con all week. Yeah, I know, but I'm working for Asmodee. The con is twenty minutes from my house and I'm getting a paycheck, so what the hell, I'll show up. Happily, my boss has made me a badge that tells the world my name is 'Asmo Dude,' so I can go undercover. It's very sneaky. Once again, I find myself grateful that I don't do video reviews - in this case, because none of the people I have called unrepentant tools know what I look like.

Anyway, you would think with that many games all over the place, and my job being to just basically play games all day, I would have an actual game review up here. But the thing is, I've really played three games the whole time, and while I am getting pretty good at them, none of them are my games. If I can talk my boss out of review copies of Kemet and Archipelago, I will tell you all about them, but I know he doesn't have a spare copy of Seasons, which is one of the best games I've played this year.

So instead, you get a comic book review. And you're getting this review because I can't stop reading this silly comic book, and I think you should know about it. It's called Chew, and it is funny and dark and twisted and goofy. The title character, Tony Chu (get it? Chew?) is a cibopath, which I'm pretty sure is a made-up word. What it means is, Detective Chu can eat stuff and know things about the food. Like he can eat a banana and know where it grew - or he can eat a finger and know if the late owner was behind on his child support.

This leads to a thoroughly disturbing investigatory style, in which Detective Chu takes bites out of corpses to find out who killed them, or he licks blood spatters off his fists after he beats people to find out what they know about chicken-smuggling rings.

Yep, chicken-smuggling rings. In the bizarre alternate world of Chew, the FDA is the strongest government organization in the United States, and they have issued a ban on eating birds. They claim it's because the avian flu killed a lot of people, but the insiders know it's a dark conspiracy. The conspiracy appears to be linked to aliens, possibly a vampire, maybe female Russian assassins in bikinis. In response to the ban on birds, a huge international black market has sprung up, in which armed thugs and shady back-room negotiators sell unregulated chicken.

If you're thinking, 'this sounds completely absurd,' then you're right, it is. And yet even though it's ridiculous and silly, unbelievably goofy and completely twisted, it's still less absurd than a crimefighter wearing brightly colored spandex to a firefight. And better yet, the writers have already announced their intention to finish the whole story in 60 issues, which means forty years from now the main character's children will not grow up and be only slightly younger than he is.

The writing in Chew is damned entertaining. The story seems to be so crazy that it should be unacceptably stupid, but it's all very tongue-in-cheek. The writers know they're on shaky ground, and rather than trying to back off the strange, they crank it up to eleven and holler, 'damn the torpedoes!' What results is a concept and book that is unpredictable, dark and impossible to put down.

I will issue this warning - the art in Chew is not what you're used to seeing. It's not like anything else I've seen. The characters look like they could have stepped out of a Nickelodeon cartoon, complete with strange angles and oddly shaped eyeballs. It's beyond cartoony, though. It's extremely stylized, and while I absolutely love it, this really might not be your cup of tea. Somewhere, Jim Lee is gnashing his teeth.

Chew is also thoroughly grown up. It's got cuss words and boobs, which is pretty much par for the course if you're reading Image Comics. And even if they cleaned it up for television, there's still the FDA investigator taking bites out of rotting corpses to look for clues. It's disturbing - but the gross factor makes it freaking hilarious.

If, like me, you prefer your comics with developing stories and a distinct lack of superheroes, you really ought to check out Chew. It's funny and gross and stylish and massively entertaining. It's also only about halfway through the run, and the first bunch of issues have been collected into trades, so you can get caught up quick. Check it out on Comixology, or see if you can run down the back issues. It's worth it, if you like books with meat. Especially rotting cannibal meat.
Posted by Matt Drake at 11:34 PM