Board Game Review - Venture Forth 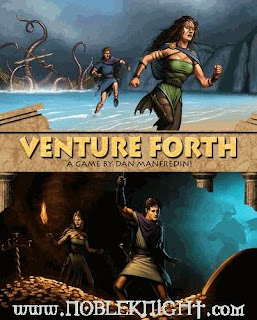 My favorite kind of game is the dungeon crawl, where you traipse around an underground lair, kill things you find there, steal their stuff and maybe rescue prostitutes who may or may not be so grateful that they give you freebies (granted, very few games include the grateful hookers, but that sure would make a cool game, even if it meant you couldn't let your kids play it). Venture Forth is not that kind of game.

But it's OK, because my second favorite kind of game is the adventuring game, where you put together a band of heroes who traipse around the world, kill things they find there, steal stuff and maybe rescue grateful whores. And that is what Venture Forth is about (but without prostitutes). It's a little like Talisman, a little like Runebound, and little like a European game that comes with tiny wooden blocks. But for a cool twist, it's in Greece, and not failing-economy-and-ugly-fishermen Greece, but this-is-Sparta-battle-for-Olympus Greece.

Most of the adventure games you could play boil down largely to the dice - you roll dice to move, then you roll dice to fight, then you draw treasure cards or turn into frogs. But there are no dice in Venture Forth, because like I said, it's a little like one of those European games that are all about solving the game. Happily, the theme works even without all that dice-rolling. In fact, it might even work better.

Another brilliant element of Venture Forth is the way the monsters and potential buddies appear on the map. If you want to get some gold, or get a little heroic might for your adventuring heroes, you're going to have to put out monsters and adventurers that other players could encounter. You might try not to give away the best stuff, but sometimes you won't have a choice and you'll just have to give an opponent the amazon so that you can power up your hunter. This means there's a great reason to seed the board with snarling monsters and intrepid allies, because it's about the only way the game provides to get you the resources you need to be successful.

If you prefer your games to be light-brained and lucky, you're going to be very disappointed in Venture Forth. There's an element of luck, in that if you're not holding the right cards, you're probably going to lose some momentum. But the real luck factor comes from the other players. Can you count on the guy to your left noticing that you just set him up a road full of legendary exploits, so that he'll leave you alone and you can go hire the swordsman you desperately need to defeat the hydra? Or will your daughter just wander up and down the same freaking path, over and over, and spend the entire game stealing the only way you have to get out of the mountains and actually get a couple points before the game ends (if your daughter is my daughter, then yes, she will do that)?

At the same time, there's a definite puzzle-solving element to Venture Forth, one that should definitely appeal to fans of games with wood cubes, but may leave behind those gamers that prefer bloodshed and dice. You'll need to plan your escapades and place your foes to maximize your odds of heroic adventures, all while attempting to account for the other players who might be really thrilled to steal your awesome adventures before you can get there. It lacks some of the visceral bloodshed and random thrills of other adventure games, but at the same time, you'll definitely see the unfolding tales of Greek heroes stamping their mark on a world of legend.

But sadly, they will not find grateful prostitutes.

Pros:
A fun adventure game that brings the theme to life
Lots of planning, careful plays, and outsmarting your friends
Great art on the cards
No dice (could be a con)

Cons:
A little bit like solving an efficiency puzzle
Weak art on the board
No grateful prostitutes
No dice (could be a pro)