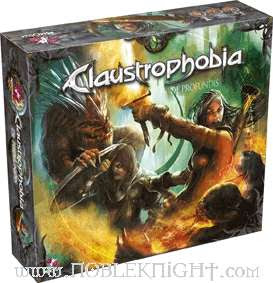 Claustrophobia has to be one the finest head-to-head dungeon crawl games you can buy. You've got brilliant rules that ramp up the tension and keep the game down to the wire. You've got really cool pre-painted miniatures. And best of all, you've got Dark Ages Crusaders romping around in the bowels of Hell and beating the ugly out of demonic hordes. I can't think of anything bad to say about the game, especially when I get to send ravening demons to chew the gonads off a bunch of self-righteous, Bible-thumping assholes who think they've got some right to perform home invasions just because the residents have horrible skin conditions and poor dental hygiene.

And it just got a whole lot better, with the inclusion of the magnificent expansion De Profundis. There's so much stuff in this box, you won't know how to store it all (I'm not exaggerating - I hate keeping two boxes for one game, but I can't fit everything into one box, and it's vexing me).

Basically, it's like the creator of Claustrophobia sat down and came up with every cool thing he could add, then added it. Then the publisher came and said, 'oh, we'll have to cut-' but the publisher never got to finish, because the creator punched him in the sternum, and the publisher wheezed for five minutes and agreed to let the creator have whatever he wanted, as long as there was no more violence.

There are new minions for the demon player in the form of Hellhounds. These are some bad-ass, mean motor-scooters who will tear up any humans who get separated from the pack. They're wicked cool, but they're kind of pricey, and the demons only get two of them. The new cards that go with these guys give them a ton of ways to be useful, too, and the demon player is going to have a great time taking these guys out for a walk. They are, of course, beasts from the pit of Hell, which means they are prone to starting fights with smaller dogs and pooping on the neighbor's lawn, but at least they're leash-trained.

To meet the added threat of Satan's pit bulls, the forces of humanity have their own secret weapon - the siccaria. If that word is new to you, don't worry, because it's new to me, too. Or it was, until I looked it up. It means 'assassin,' and because it ends with an 'a', it means chick assassin. You can ask anyone you want - chick assassins are awesome. And these particular chick assassins are freaking death machines. In fact, any scenarios that let the humans use the chick assassins has to give the demons even more monsters, because those siccaria will go through them like a hot knife through soup (I know the saying is about butter, but I think a hot knife would go through soup faster).

And let's just assume you were getting tired of tromping through the same old tunnels. 'Oh', you might say with a bored expression, 'another hallway lined with flesh-eating tentacles. Oh, another lair full of teeth-gnashing, murderous demons. How wonderfully pedestrian.' But now you'll explore some new places! Now you can find the sanctified zone, where demons who enter the room will be forced to change their ways and volunteer at the Salvation Army. You can also run across the demonic well, where seriously twisted monsters with horrifying dark powers like to spend their downtime. There's a pool table, and the bar has tons of imports on tap.

I could actually keep going, and describe every cool thing in the box, but that would just spoil it for you (one more spoiler - there's a baby troglodyte. OK, now I'm done). But the point is, De Profundis is full to the rafters of new stuff that will make Claustrophobia a whole Hell of a lot more fun. There are more scenarios than you're likely to play in a year. There are lots of new demonic events, holy gifts, and blessed artifacts. There aren't a bunch of new rules, or new ways to play the game. There's just a big fat pile of stuff that makes the original game a whole bunch better.

If you like Claustrophobia, and you play it more than once a year, you're going to want De Profundis. If you're offended by the theme, find the demons too blasphemous, or think the entire concept is completely absurd, then you're probably about as much fun as a wet diaper, and you should probably head back to the kiddie table, because the grown-ups are talking.

Pros:
More forces of Hell
More forces of Humanity
More places to die
More scenarios
More cards
More of everything that makes Claustrophobia such an awesome game in the first place

Cons:
Where will I put it all?

So if you read this site often enough, you know that Noble Knight Games sets me up with review copies. They get me review copies I couldn't get otherwise, which lets you read about the games you want to see. And so if you're going to buy your games, get them from Noble Knight, and give them a reason to keep sending them to me. Here, start with De Profundis:
FORCES OF EVIL IN A BOZO NIGHTMARE
Posted by Matt Drake at 8:15 PM