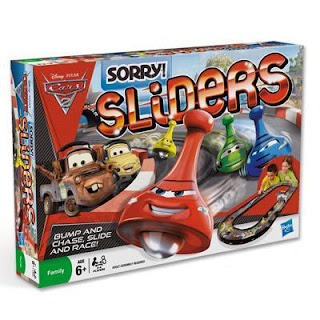 Sometimes an idea hits the market that's so good, you wonder why nobody thought of it before. Like the guy who came up with a worldwide swap meet, called it eBay, and then got richer than God. Now, from anywhere in the world, you can buy somebody's used crap. That's awesome, because previously, if you wanted a beat-up plaque announcing to visitors that they were currently in Mom's Kitchen, you had to get your kid to make one in woodshop.

Another awesome idea started with Sorry Sliders. This hilariously entertaining game has weighted pawns with ball bearings in the base, and you flick them, and they slide all over the place. And then you take that cool sliding pawn, slap it on a race track, and BAM! kids everywhere will want a copy (especially if you license it with some mega-popular cartoon movie).

I would like to think that's how Sorry Sliders: Cars 2 was created, but to be honest, I doubt it. Probably the guys at Pixar went to Hasbro and said, 'make us a Cars 2 game so we can get more kids into the movies.' That, or the Hasbro people said, 'we need a game to get on this Cars 2 bandwagon.' Either way, Sorry Sliders: Cars 2 was probably a result of aggressive marketing, not brilliant game concepting.

Either way, though, the game is cool. Where Sorry Sliders has you trying to get your pawns into a scoring area in the middle of the board, the Cars 2 version has you speeding around a track and trying to avoid obstacles that will send your pawn/car spiraling through the air to smack someone straight in the forehead and put them directly into a coma. It still adds a few of the Sorry Sliders elements, like zones where you get to flick your racer again or areas where, if you get stuck, you have to shoot with your eyes closed. But mostly, you race. And that makes it fun.

You might be thinking, 'yeah, I kind of liked that idea the first time it came around, when it was called PitchCar.' And I would have to agree. This is pretty much just like PitchCar. You build the track you want from the pieces you have, then you race around it. But there's a huge difference here. The PitchCar cars are wooden discs, and they don't slide anywhere unless you shove the crap out of them. The Sliders cars, on the other hand, glide like they were covered in water-based lube, but without all the mess. You can send those cars flying with a simple motion, which makes them easier for kids to use and makes the game move a lot faster. Plus you get more hilarity when the cars go careening off all the other cars and bust the other players in the eyeteeth.

Of course, the Hasbro version comes with exactly eight pieces of track, and if you ever played PitchCar, you know damned well that's not enough. Sure, it might amuse a handful of kids for an afternoon, but if you want to really have fun with it, you need a lot of track. It might help to have jumps. Tunnels would be great. In other words, PitchCar still beats Cars 2 because even though it's WAY more expensive, it's also a heck of a lot more flexible. If you get the expansion packs for Pitch Car, you can add ramps and jumps, overpasses and intersections, and other stuff that will make you want to play a bunch of times just because you can keep trying different tracks.

There is a solution, however. What you can do is, you can buy two copies. Then you can make all manner of windy tracks! But then, this doesn't work so well, because the real advantage Sorry Sliders: Cars 2 has over PitchCar is that it's half the price. Buy it twice, and you could have just bought PitchCar. Dammit! Stymied again!

But I actually have the best solution yet, based on the fact that I really do love how well the Sorry Sliders pawns work as cars. It's a simple three-step plan:

1) Sell Sorry Sliders: Cars 2.
2) Build a PitchCar track.
3) Use the pawns out of my copy of Sorry Sliders instead of wooden discs.

Come to think of it, maybe this Sorry Sliders racing thing wasn't as awesome as I thought.

Pros:
The cars are really cool, and move really easy
Cool obstacles to mix it up and make things more interesting

Cons:
Not enough track to make you want to play more than two or three times

If you want to entertain your movie-junkie kids and give them something to do besides get fat watching cartoons, Sorry Sliders: Cars 2 really is pretty darn fun. You can find it practically anywhere that sells toys, too.
Posted by Matt Drake at 2:48 PM