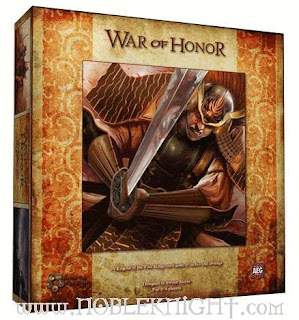 Sometimes, as a game reviewer, it's interesting to look at the games I haven't played. Legend of the Five Rings is a good example. The game has been around almost as long as Magic: The Gathering. It has a huge fan base, and is still going strong in a market where most other collectible card games go belly up within three years. And yet I never so much as bought a starter. Probably I never tried the game because I don't much care about the theme. Call me a heretic, but medieval Japan never really appealed to me, probably because Japan holds the worldwide trademark on Seriously Bizarre™. I mean, what other nation offers its male citizens the right to buy soiled womens' underwear out of vending machines? Just Japan. Because Japan is weird.

War of Honor was finally an excuse to give it a shot, though. Alderac packaged up four decks, whipped up a few customized rules, and called it a board game. There are a few rules that they left out, but as far as I can tell, War of Honor is just Legend of the Five Rings, but slightly simplified (and I do mean slightly). I kind of thought it might be a bit more streamlined, but I read the part in the rules about playing with the full rules from the CCG, and basically, you have to add in the honor requirement. I don't know what that means, by the way.

What I do know is Legend of the Five Rings is one busy game. There's so much going on that you would need to be either incredibly experienced with the game or a forensic accountant to be able to track everything that could happen in one turn. I'm not sure if we played correctly or not, because frankly, we had one hell of a time trying to remember when we were supposed to do any particular thing. We had to refer to the turn order reference throughout the entire game, because we kept forgetting when we could play particular actions, or pay for land, or otherwise do all the stuff you can do. You would think that in a three-hour game, we would have been able to remember what we were doing by the end, but there was just so much to track that we fell prey to information overload. I think our brains started melting.

The overall objective of War of Honor depends entirely on how you want to play. For instance, if you can destroy five provinces by marching off to war, you can win a military victory, but if you can play five rings, you win an enlightened victory. There are also victories from winning lots of honor and for causing massive dishonor among your enemies. Like if you can catch your enemies buying used panties out of vending machines, you can cost them honor. This is kind of how the Scorpion Clan likes to win, because they just run around showing everyone how you were caught sending pictures of your wiener to your employees and proving that yes, you did have sexual relations with that woman.

There are a lot of things about War of Honor (and by obvious extension, Legend of the Five Rings) that are innovative and really interesting. For instance, you have two decks. One is the cards you'll play, like tactics and weapons and spells, and the other gives you the land and people you need to wage war. You'll draw from the one deck every turn, but the other one gets dealt out into your provinces, four spaces that sit between the two decks, and you can buy these cards if you can afford them. It's actually quite brilliant, and unlike anything else I've played. Managing these two separate elements is a key to playing the game well, and this dual-deck element sets Legend of the Five Rings apart from the hundreds of card games that float around for six months and then go up in smoke.

Possibly the most interesting thing about War of Honor is how battles play out. Losing a battle can be very painful - everyone on your side will die, and that can leave you with a pretty big hole in your defenses (not to mention how much honor you'll lose if you don't have an open bar at the funeral). So to help you when you're in trouble, you can invite other players to help you out. The thing is, so can the other guy, and when your opponents jump in on the other side of a conflict when you thought they were going to help you out, your gasps of shock and rage will make everyone at the table giggle delightedly. If you can manage to win the fight even when everyone comes out to beat on you, though, you'll get the last laugh. All these shifting alliances and deadly battles make Legend of the Five Rings a fascinating and enormously fun game.

Unfortunately, some things suck that fun right back out again. Mostly, we were dismayed by how long it took to play War of Honor. I concede that experienced players could probably go much faster, but the 90 minute play-time quoted on the side of the box must have been assuming a two-player game between grown men who had been playing since they were in junior high. We had one battle that took thirty minutes all by itself, and the whole time, two of us had to just sit there and watch. Maybe if you decide to play War of Honor, you should have a second game off to the side that you play when it's not your turn. I suggest Nightfall. I love that game.

War of Honor uses most of the rules for the CCG, as I mentioned before, but it also adds in fortresses, which determine who gets a bonus for attacking which enemy, and give special abilities to the players who have those fortresses. When one of your provinces is destroyed, you also lose a fortress, which means smart opponents can trash your most dangerous abilities to keep you in check. This is just another example of a cool thing that makes the game better, and yet manages to slow it down and make it take too long.

I can't point to anything in War of Honor or Legend of the Five Rings that I didn't like. But I really wish they could have streamlined the game a lot more, because while I enjoyed the parts where I was playing, I grew incredibly tired of the slogging pace. We had epic battles and huge land holdings, but that meant there was an insane amount of downtime and we ran out of room on the table. If War of Honor had trimmed a lot more off the CCG, I think it would have been a resounding success, because there's a lot here to like. But I won't be buying any more cards, even if I could use them to play War of Honor, because I just don't have the patience to sit for hours barely doing anything. I can see why Legend of the Five Rings is so popular, but I also think that avoiding it for the last ten or more years was the right call. I think I'll go back to avoiding it, and if I feel the need to engage in some wacky Japanese action, I'll just buy some dirty drawers out of a vending machine.

Pros:
Innovative ideas set it far apart from other CCGs
Player alliances make this one of the best multiplayer CCGs ever designed
Several different ways to win
Beautiful art and nice pieces

If you have the patience and determination to play a game this long, you can get yourself a copy of War of Honor from Noble Knight Games:
GET SOME VENDING MACHINE SKIVVIES
Posted by Matt Drake at 1:36 PM

You made me laugh man. Sounds so true...

I haven't laughed so much in a long time. I wrote a post about WoH (http://stsu.blogspot.com/2011/08/war-of-honor-l5r-multiplayer-game.html) and I tried to imagine how someone not with any card game experience would buy this game to try it out. after reading your article I can imagine it^^.

calories per day for women