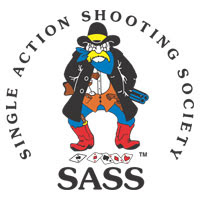 Cowboy Action Shooting has to be one of the most bizarre events I've attended so far. It's entirely possible that it was more surreal than when we used to go watch the Society for Creative Anachronism people at the park, when they would get dressed up in historically inaccurate armor, swing foam swords, and address each other by fake names such as Lionheart Vineripen and Gronad Bronzeweiner. The difference, when it comes down to brass tacks, is the dedication. Sure, the SCA people spent a ridiculous amount of their time coming up with their alternate personas, but the Cowboy Action Shooting people bring actual firearms. They also have costumes, and like the medieval reenactors, create fake names for themselves.

If I was going to join the Single Action Shooting Society (SASS, for short), I would need a fake cowboy name. I'm having trouble thinking of one. My first instinct was Dingus McDingus, but I'm not Scottish.

The SASS members have some singularly silly names. The first guy we met goes by the name Bang Gunsleigh. I did not make that up. We also met Aloe Vera (this was a man, incidentally) and Grumpy Grandpa. Then we flipped through their newsletter (it's huge!) and found a man who calls himself Bad Penny (when did Penny stop being a girl's name?) and Double Barrel Betty, whose 'gun rack' did not live up to her title.

The costumes ranged from shockingly accurate to barely adequate. Everyone had cowboy hats and boots, and two-gun holsters, but a lot of the guys were just wearing jeans and a long-sleeved shirt and calling it finished. Some went whole hog, though, with coats that looked like they came off a dime store mannequin and checkered vests with pocket watches. One guy had those old-school pants that had to be held up with suspenders. You could almost assume he was wearing long underwear. It might have been red.

The group I was visiting with my son specialized in live ammo at steel targets on a gun range. There are other variants, like mounted shooting, which uses blanks and balloons, and quick-draw competitions, where they shoot at each other with wax bullets. But this group uses real bullets, often loaded using black powder, which makes an enormously awesome cloud of smoke and spits fire out the barrel. They're timed, with penalties for missing targets, and they use scenarios plucked straight out of black-and-white John Wayne movies. The targets represent the various bad guys who need a good case of lead poisoning, and before you can shoot, you have to use a gunfighter line. Ours was, 'Walk away or draw.' I wanted to add, 'ya yellow varmint,' but that would have cost me time.

(Smokey Splodeypants? That has some promise.)

For all the silliness wrapped around the falsely historical cosplay, I have to admit that it was a hoot shooting the guns. For a pretty low fee, we got to show up and shoot other peoples' guns with other peoples' bullets. We got to shoot twice, both times firing a pair of six-shooters, a lever-action rifle, and a side-by-side double-barrel shotgun. All the weapons were serious - you could definitely kill people with any of these firearms. These aren't show guns, and they have all the kick and clouds of smoke you would expect if you ever saw a Clint Eastwood movie.

Cowboy Action Shooting is really fun. Sure, you have to adopt a silly name, but the costume part is cool. And the guns – man, I don’t shoot very often, but it’s a hell of a good time every time I do it. The whole affair is surreal, but you can tell these people are having fun. It’s like LARPing for Republican gun nuts.

(What about food? I could be The Denver Omelette, or Juevos Rancheros.)

For all the fun I had, though, I doubt I’ll be doing it again. For one thing, if I want to go back, I have to sign up. There’s a steep yearly membership fee, and then there’s the costume. Just the boots and hat could cost a couple hundred, and all of that is before you even buy a couple thousand dollars worth of replica Old West firepower. And even if I could afford all that, there’s still the silly name.

Pros:
You get to shoot some awesome guns
Semi-historical silliness, which is great if that’s your bag

You can find out more about the Single Action Shooting Society here:
http://www.sassnet.com
Posted by Matt Drake at 6:41 PM

Matt, you don't need to spend all that much, to be honest, aside from the membership.

A Ruger Vaquero or other "modern firearm replica of an old firearm" isn't really expensive, and you can always go with the ol' scattergun, in which case any old SxS coach gun will do, and you can find them at CDNNInvestments.com from time to time for $199.