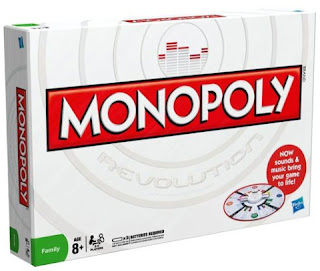 You know how, when you tell a normal person that you play board games, they always go, 'you mean, like Monopoly?' And then you realize that you would have more in common with that person if you were a fan of Peruvian line dancing? And then you try to explain that the games you play go way, way beyond Monopoly, and you don't even like Monopoly? And then they walk away because you start to foam at the mouth a little bit?

Well, that's not going to get any better any time soon. If Hasbro has their way - and considering they have more money than the gross national product of most of Central Africa, they probably will - people will be responding to the mention of board games with, 'hey, I play Monopoly!' for the next two hundred years.

To make sure that nobody ever forgets that Monopoly is available at a store near you, Hasbro releases a new version approximately every thirty-seven seconds. Of course, that number includes licensed versions of Monopoly, like Simpsons Monopoly, Star Wars Monopoly, and the often overlooked Vegas Hooker Monopoly (not available at Wal-Mart). So it is no surprise that they released Monopoly Revolution, because they were overdue for a new version of Monopoly by almost 45 minutes.

Monopoly Revolution does virtually nothing new, except that everything is different. You still have the dog and the horse and the shoe, but now they're not little pewter sculptures, they're groovy line art on a clear plastic doodad. You still have all the same properties in all the same places, but now they're wrapped around a smaller, circular board. Jail and Free Parking and Go are all right where they should be, but the funny little Monopoly dude has been replaced with crisp vector art. The redesign is sleek and cool and new, with all the soul of a hospital X-ray machine.

Come to think of it, not everything is the same - you don't have money any more. The money has been replaced with credit cards, which you plug into the sides of an electronic gizmo that plays music and takes your money, sort of like a pickpocket carnival monkey. This one change means that you don't really need a banker any more, because the machine does it. It also means that you don't have to make change. You don't run out of $100 bills. You don't have one sneaky bastich swiping stray hundreds and hiding them under the board for a rainy day, which is defined as landing on Connecticut with four houses.

The electronic thing also replaces the Chance and Community Chest cards. You still have the spaces for them, but now when you land on one, you hit a button and it tells you what happens. Also, every now and then, it will go off and start making noise at random moments, causing the current player (or whoever just put their card in the machine) to be subjected to a random event like winning a beauty pageant or paying ungodly amounts of money for repairs.

Come to think of it, this game could not have a more inappropriate name. There is virtually nothing revolutionary about this version of Monopoly. It is almost exactly the same game that has been gathering dust in closets all over the world for 75 years. Making something prettier and easier to play is not revolutionary, unless your standard operating procedure is to make ugly games that are a pain in the ass. And while I could come up with many derogatory things to say about Hasbro, they do have good artists, and they're usually pretty good at making games that are easy to play. So this is more like 'Monopoly: Prettier and Easier'.

Cons:
Still Monopoly (only a con if you dislike Monopoly)

A potentially interesting angle is the computer. I've been thinking about hidden computers in board games more and more to not only take some of the drudgery out of games ( altho I gave to say one of the only things I liked about monopoly was counting my money and some friends loved being the banker more than playing the game) but to allow players to interact with a more complex world.
I'd love to hear your thoughts in a post on the future of board games. I've collected a few games from 70s when electronic board games were the fashion like "Stop Thief" where the computer keeps track of a hidden thief on the board which players have to find through clues, but I'm not aware of anything more complex than this or any recent developments.

I googled Vegas Hooker Monopoly. Sadly your blog was the only result that matched...

Does the game come with a convenient way to tell whether properties have been bought or not?

That's one thing I liked about the Star Wars Episode I collector's edition version.

MM, that's an interesting idea for a future article. I'll roll it around and see if I come up with anything.

Sorry, Knight, I bought the only copy.

I wanna be the thimble.

No, I wanna be the thimble.

No, you were the thimble last time.

No, you were. Be the battleship.

I don't WANNA be the battleship.