Board Game Review - 10 Days in Asia (and/or Europe) 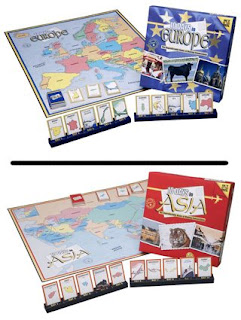 Out of the Box Publishing recently confused me by sending me two games that are virtually identical, which put me in something of a conundrum. The two games are 10 Days in Asia and 10 Days in Europe. If I write a review of the Europe version, the review of the Asia version will be pretty short - 'just like 10 Days in Europe, but in Asia'. After playing them both, I decided that the best way to review the games would be to lump them together into one review. I hope Out of the Box doesn't chop me out of their reviewer list for this, but it just didn't make sense to review them individually. And hopefully they'll still like me a little after they read how much I like both games (assuming they don't already hate me for panning Cineplexity).

The premise of 10 Days (wherever it is) is pretty basic - you have to plan a ten-day trip around the continent, connecting countries by ship, plane, train or just plain walking. So you can start in Iran, walk to Azerbaijan, take a train to Turkmenistan, fly to China, walk to Mongolia, walk to Russia and fly to the Philippines. That's a ten day trip. Yes, it's a little stilted - it takes as long to fly from Thailand to Taiwan as it takes to walk from Laos, through China, to Russia. But that's basically irrelevant - a flight takes a day, a train takes a day, a ship takes a day, and a stroll takes a day. If the game didn't work that way, it would be called 10 Days in China and all the cards would just have pictures of China. It would be a pretty boring game.

You plan the trip by drawing cards. You can always see three face-up cards, plus the face-down pile, so you draw the cards and try to get them in order. If the countries are next to each other on the map, you're fine; those two cards can be next to each other. But if the countries are connected by a railway, you have to put a train card between them. And the countries have to be the same color on the map, with a matching plane, to fly between them. Ship travel is the easiest - you're either on the Pacific or the Indian, so there are only two kinds of ship cards in Asia. Europe has three seas - the Baltic, the Mediterranean and the Atlantic - which makes ocean travel a little trickier. But on the other hand, Europe doesn't have trains, so that helps a little.

Yeah, it sounds a little confusing, and I'm probably not explaining it very well. The game is a lot easier to explain when I can show you the deck of country cards and vehicles and say, 'see, China has a railroad, so you can use a train to connect to India, and Yemen and India are both orange, so you can fly between them with an orange plane.' If you're not confused, then one of two things is happening. Either you're a lot sharper than you let on, or I'm not nearly as bad at this as I feel.

One of the coolest things about the 10 Days games is that you get a geography lesson without really meaning to learn anything. For instance, before we played 10 Days in Asia, I never could have found Bhutan on a map. But now I know right where it is. I can also find Montenegro and Moldova - at least, I'll be able to find them until some violent uprising turns them into satellite states or splits them into warring nations. Come to think of it, both games would have been a lot easier before the Soviet Union fell apart.

If my inadequate explanations do a piss-poor job of explaining how the games are played, I can at least tell you this - both games are a hell of a lot of fun. We break them out and play them on a very regular basis, and since I wind up owning an awful lot of games, it means something when I play them more than once, let alone once a month.

See, the 10 Days games require more than a knowledge of geography. You have to be able to plan your trip, know when to toss cards you can't use, place the right cards in the right slots, and avoid making stupid mistakes, like putting Nepal right in the middle of your trip. But even though you need more than geography does not mean you don't need it at all - in fact, the quicker you learn where Belarus is in relation to Latvia, the lower the chance that you'll end up putting a boat between them. You have to know which nations are landlocked, which are connected by train tracks (in Asia), and whether you can fly from Jordan to Japan. Malaysia may not seem like much of a country in the broad scheme of things, but since is straddles two oceans, it's one hell of a strategic card to pick up.

And then you also have to watch what your opponents are trying to connect. There's a little poker face needed here - if you grimace when someone covers up that yellow plane you were hoping to nab, you can kiss goodbye any chance of an accidental discard letting you have it later. If you can see that one opponent is routinely discarding blue countries, it's a safe bet you can dump your own, though you may want to be careful dropping Macedonia if your opponent just snatched up Bulgaria.

I tend to hate educational games, just on general principle. I like my learning to come from Wikipedia, thank you very much. But 10 Days in China and 10 Days in Europe are both quite educational, and reward the player with more knowledge of geography, and are still somehow a great big pile of good times.

Pros:
Great strategy and planning
Limited luck, but it's still there (and you'll know it when you're drawing card after card thinking 'God, I just need something green')
You can learn stuff even when you don't mean to

Cons:
Out of the Box needs to hire a wicked awesome graphic artist - these games aren't pretty

The 10 Days games are a total blast, even if you do accidentally learn stuff. Go here and get 'em:
http://www.funagain.com/control/category/~category_id=SERIES_1465
Posted by Matt Drake at 8:25 PM

Oh great, more games i need on my wish list.

I always find it funny that people don't like dice games because of the luck involved, but a lot of the same people think cards games are fine because they are not so luck based - when I find them pretty similar all said and down, it is up to luck what #'s come up on dice, or what card is at the top of the pile?

I think your pretty good at this reviewing thing, I understood the game and think they both sound fun.

Is there one of the 2 your prefer?

I really like them both, and play them in equal measures. There's also 10 Days in Africa and one in the US, but I haven't played those. I might just buy the Africa one, though. You can get it from Funagain for $20.